These are for everybody, but especially Shelley, who would like to see some snow buntings. I love these guys. They make the cutest little noises, and are hanging around here all the time now.

Hopping around on the snow. 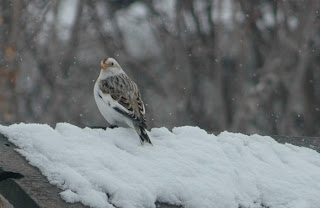 Checking me out on the other side of the window, with great suspicion. 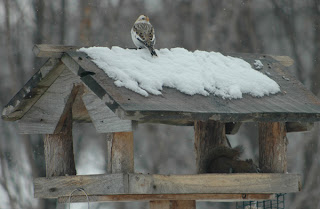 While the squirrel munches on, typically not giving a damn. 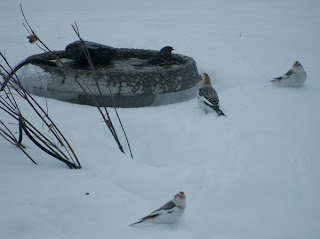 One of the buntings checks out a sparrow actually having a bath! It had warmed up a bit outside, so I guess he figured he wouldn't freeze to death. He also managed to drain the bath! One more storm and that birdbath will be subterranean. 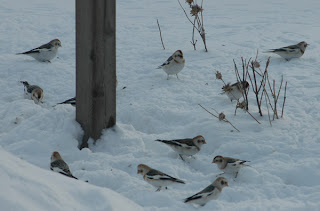 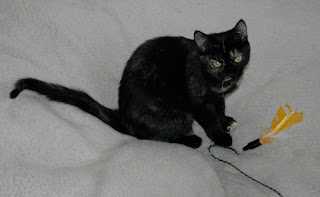 And here's Naomi, with the only kind of bird she'll ever be allowed to catch since she's an indoor kitty. That said, two juevnile starlings did fall down our chimney last summer, but I managed to save them both before the cats caught them!

Naomi loves that toy. It's a big wand with a feather on the end of a string. She carries the feather in her mouth and drags the wand behind her, all over the house. She's also the first cat I've ever had who plays fetch! Btw, she doesn't have cataracts. I still don't know how to use the red-eye reduction on my camera, because I am too pathetic for words!! (Read the manual, LAZY!)