Hats off to me, the sequel

Finally finished a knitting project! Thank you, thank you. Gordon already has one of these hats, but he went out and bought a blue and black parka that didn't match his green and brown hat (that I finished LAST February), so at his request I knit him another one. I am so DONE with this pattern!!!!! Next I am going to finish the beaded alpaca lace scarf I have been knitting for myself since last year, from a kit Dephal kindly sent me. It's about time I finished knitting something for ME. 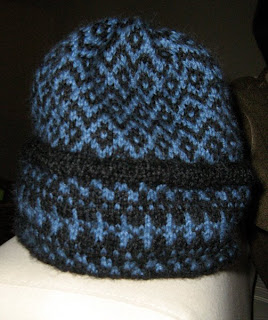 Here it is, all perky-like. 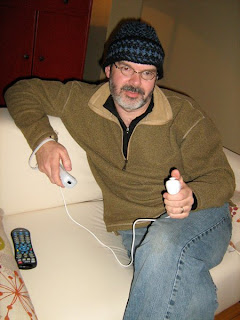 Wait! Let's cram it on Gordon's head while he's concentrating on his Wii game. Probably it would look better if I had arranged it instead of cramming it. He has a touch of Mr. Conehead going on. Note the zombie-like gaze of Gordon's Wii-obsessed eyes. Actually, he looks a bit like the stoners at my high school. If only he had work boots and a lumberjack jacket, c. 1980!
(Note: Mr. Gordhead is not a stoner. The closest he gets to that is a beer with his pizza, or his annual glass of port.)

This morning he spent three hours in the woodlot with his forester friend, learning how to use his chainsaw safely. The two of them had a blast and came back looking all happy and sweaty. I fed them homemade soup and cornbread. They had cut down some unsuspecting (and diseased) white pine tree. On their next date, I mean, outing, they are going to have a campfire back there and roast weenies. I'm pretty sure girls aren't invited. Manly men stuff, you know!

I did a limb- and digit-check when they got back. Gordon didn't cut off any body parts. Hooray! 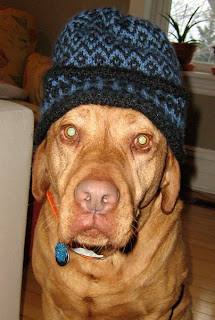 I think Tristan makes a better hat model, don't you? 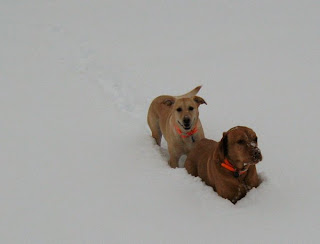 Yesterday, Tristan got tired while we were out snowshoeing and decided to lie in the snow. Sophie was too lazy to go around him, so she just waited there until he got up again.