Queen of all she surveys

Given that I just found her closed in the file drawer of my desk, meowing pathetically, it's hard to believe that Naomi is Queen of all she surveys. 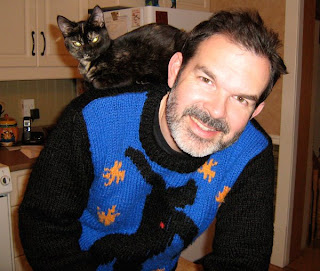 That sweater Gordon is wearing is the first one I ever knit for him, nineteen years ago (!), when our love was young and I spent a lot of time on the train travelling from Toronto to visit him in Montreal. He refuses to part with it. The design is a Matisse print out of a sweater pattern book my Mum gave me in the early 80s. I think I made it with some brand of Patons acrylic or acrylic/wool blend that I probably wouldn't touch with a ten-foot pole now that I'm a yarn snob. It has worn surprisingly well. I think Gordon might want to be buried in it when he shuffles off this mortal coil at age 104.

And how could we let another day pass without the continuing love affair of Naomi and Alex? Well obviously we couldn't! I found them like this yesterday afternoon. I don't think they were impressed with me interrupting their nap. (For those who forget, Alex is missing a hind leg. That thing Naomi is resting her chin on is his tail.) 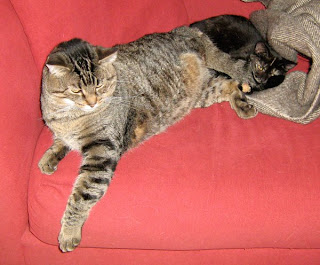 Romeo and Juliet, Tristan and Isolde, Bogart and Bacall, Lucy and Desi, Phyllis and Colin, Britney and K-Fed (urgh!), Brangelina: this feline coupling is a love story that RIVALS THEM ALL!

And for those tired of cats, we have the house dork: 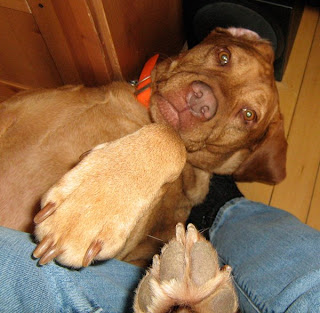 He was lying at my feet, on his back, with his legs up in the air. My, looks like it's time to clip his claws again!
Posted by Knatolee at 4:09 pm