Yesterday I was on a beekeeping mission. My beekeeping mentor and friend Pierre gave me instructions on how to make three "nucs." These are small nucleus colonies, which will (unless something goes awry) grow into large colonies that will give me a 150 - 200 lbs of honey in a season. Huzzah!

I was a little nervous, because I hadn't done this on my own before, but Pierre assured me it was a simple task and I 'd be done in half an hour. Yes, 30 minutes.

Two and a half hours later, I was all finished. 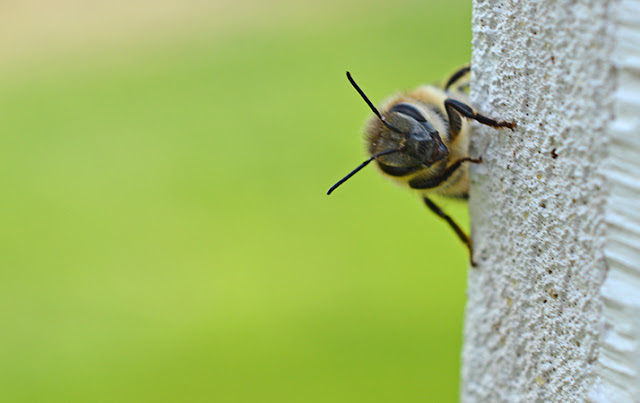 "She squashed one of my sisters with her clumsy fingers. She needed to be stung."

Oh, I got stung all right! Three times (or maybe four. I lost count!) in my left hand, at two different hives. By the time I got to the third hive, I'd broken down and put on gloves, because the girls were getting pretty cranky. I don't get stung all the often but yesterday involved a LOT of frame manipulation, shaking bees off frames and moving things around. The girls understandably got a little ticked off as I tore apart and reassembled their homes.

I hate beekeeping in gloves. I find them cumbersome and annoying and I rarely wear them. I don't get stung all that often, and while it always hurts a little bit, I'm not much bothered by the stings. I just try to scrape out the stinger as fast as possible and get on with things. The venom sac stays attached to the stinger after the bee flies away (to die, since she's just been disembowelled) and keeps pumping in venom until you remove it or it's empty. This is why you need to remove the stinger as quickly as possible if you get nailed. Hornets and wasps are another story. They have smooth stingers (unlike honey bees) that don't get stuck in mammal flesh, and they can sting repeatedly.

Yesterday I got stung while holding a frame of bees and was proud that I didn't even flinch. I'm quite used to this now, but then this is my fifth season and I finally feel like I have a clue about what the hell I'm doing! I no longer get heart palpitations when I open a hive, and I don't freak out when bees are crawling on my bare hands. 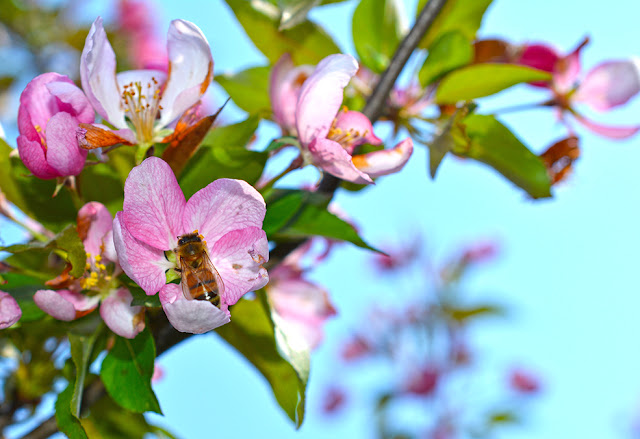 "While that lady rips apart my home, I'm just going to collect nectar and pollen from this crabapple tree!"

So what I had to do yesterday was visit each of my three strong hives and pull out four frames from each: three frames of mostly capped brood (developing bees are in the pupae stage, in cells capped with wax) and a frame of honey. These went into an empty box that went on top of the other brood boxes, with a queen excluder in between, and the honey supers on top of the whole shebang. 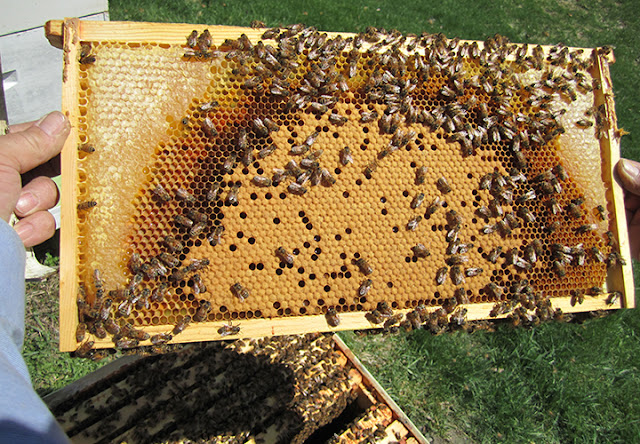 In case you've forgotten what a frame looks like, this is it! Capped brood in the centre, surrounded by pollen and honey.

Before removing the frames, I first had to shake off the bees. I always find this nervewracking, because bees aren't especially fond of this procedure! You hold the frame over the open hive, and give it two or three really hard, fast shakes so that most of the bees fall off into the hive. After that, you flick off the rest with a bee brush. They hate that even more than the shaking! But none of them stung me while I was doing this. I did have about 25 bees crawling all over me at one point. This was when I thought it would be really bad if I'd forgotten to zip the fly on my jeans. But all was well! 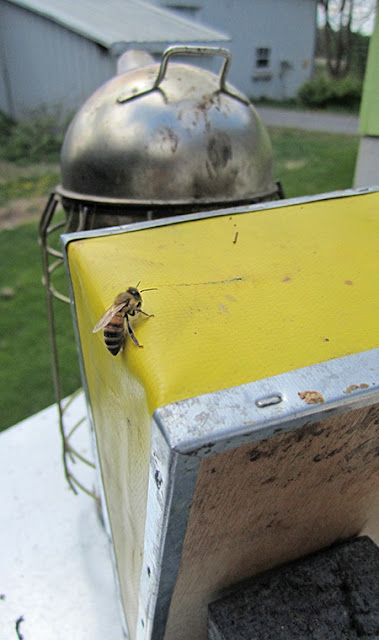 "Maybe if I sit on her smoker, she won't be able to use it!"

After the frames were pulled and place in a spare brood (deep) box, I reassambled the hive. Today at 9 am, while the bees are still in and clustered around the brood, keeping it warm, I will take out this temporary box, put the four frames into a smaller "nuc" box (the entrance of which will be sealed over with a screen, then load the three boxes of a few thousand bees into the back of my car and drive them up to Pierre's place.

That's another thing I haven't done before: driven with bees! There's a first time for everything. I feel like putting a big sign on my rear window:

Please don't hit me. This car is full of bees!

That would stop any tailgaters, don'tcha think?

Once the bees are at Pierre's, he will put a newly-hatched virgin queen in each nuc. After she has gone out on her nuptial flight and gotten laid, the nucs will come back here. They are going to Pierre's to improve the gene pool in my bees. There will be drones up around his property that aren't related to my bees, giving the queens a nice selection of menfolk to choose from. Even in bees, it's not so great if the queen mates with her brothers! 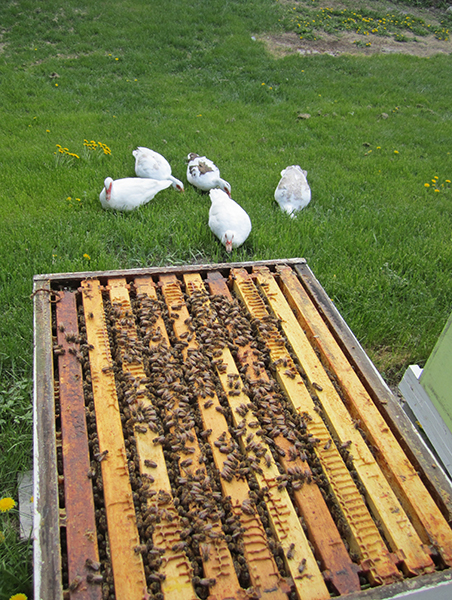 "We'd be happy to help you if you let us eat a few of those tasty bees!"

Yesterday I also finally picked up a queen (with my fingers) for the first time. I have been avoiding this ages for fear of hurting the queen, but I finally bit the bullet, put on my big-girl pants and did it. Grabbed her wings and it worked like a charm. I had to make sure I didn't put any of my current queens into the new boxes, because if I did, my current queens would be up at Pierre's, leaving the hives here queenless. We don't want queenless hives.

I also, for the first time, dropped a frame I was holding. This is always an exciting event. Fortunately I was holding the bee-laden frame over the hive, and I only dropped one side of it. The corner thwacked against the other frames and most of the bees fell off or were thrown up in the air. While this annoyed them greatly, resulting in much indignant buzzing,  nobody stung me. And I had to get the bees off the frame anyway, so it worked out okay in the end. But it is quite the experience to drop a frame and have a cloud of angry bees rise up in irritation
.
At the end of it all, the hives looked like this The little one on the right is the one that had two queens, then killed the old queen after the new queen mated. It's doing okay but needs some time to build up. 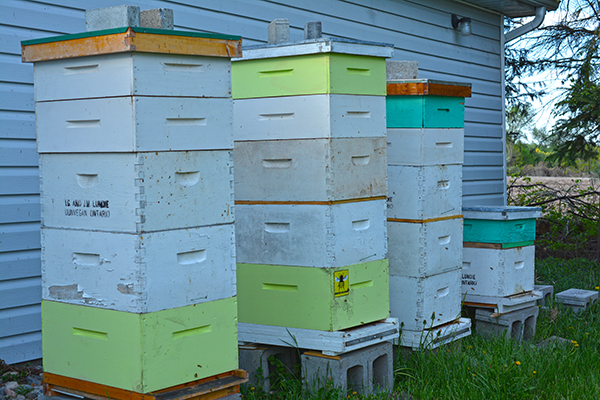 One of the honey supers is already full and weighs about 25 lbs. This is quite remarkable for so early in the season. They are just going bananas in there, bringing back nectar and turning it into honey like little machines.

And all the trees are in bloom right now.... 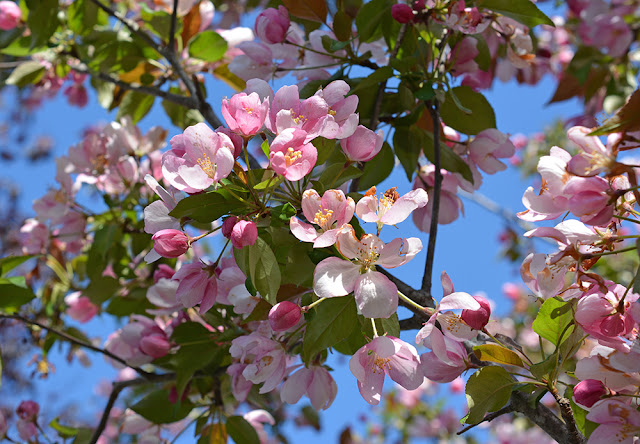 Tristan was waiting for me yestrday when I was done. 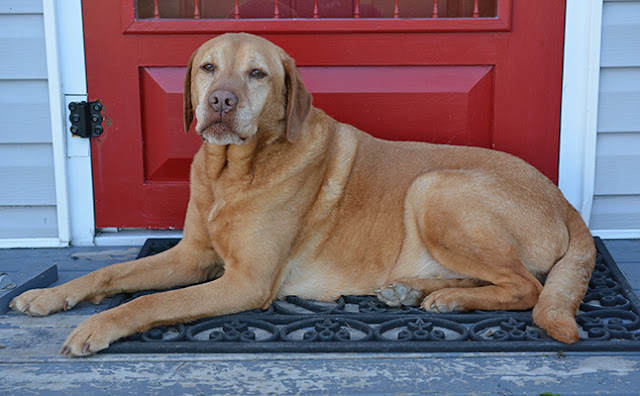 And it's time to get the deck stained again, I see.