First, the fun. Emily has something to say!

Then the run (which was also fun!) On Saturday, we participated in the Fifth Annual Heather Saaltink Memorial Run in Long Sault, Ontario.

You can read about it here. The guy second from the right in the photo accompanying the article is our running couch Jeff. The young blonde woman leading the pack (bib #150) is Heather's sister Emma. 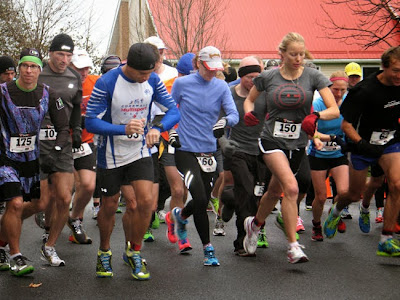 Picture from the Cornwall Standard Freeholder

Heather was killed right before Christmas 2008, by a drunk driver who crossed the centre line of Highway 138 near Cornwall. Her father and sister were in the car with her and were also injured. The drunk got five years in jail and a ten-year driving ban for this.

I heard about the tragedy in the local news when it happened. I didn't know Heather, but when I lived in British Columbia, I belonged to the same nature club as her grandparents, who are wonderful, creative, really cool people. I enjoyed getting to know them when we lived out there, but didn't realize they had family around Cornwall. When we moved back from BC in 2006 we initially lived in Quebec for a year, so I had never mentioned to the grandparents that we'd be living in the Cornwall area. Then I saw the news story about the accident, saw their names in the obituary, and put two and two together.

Now, to honour Heather's memory (she was quite the athlete), they hold this race every year. This year, donations were collected for Arrive Alive.

Amazing that it still needs to be said in 2013: DON'T drink and drive. While you're at it, don't text and drive, and don't talk on the phone and drive either. As far as I'm concerned, distracted driving (texting, talking on a phone) is the new drunk driving.

The race on Saturday was great! I set a personal best in my 5K run, even though the course was quite hilly. It was a grey day and a bit chilly but we were dressed for it and it didn't rain while we were running.

Afterwards there was TONS of food for everyone! Lots of homemade chili and baked goodies and fruit and drinks. You can tell people put a lot of effort into organizing this race. It's pretty special, as I'm sure Heather was.

I didn't take any photos while we were there, but I snapped a pic in the car on the way home. That is not a babushka on my head. Nor am I a turtle! 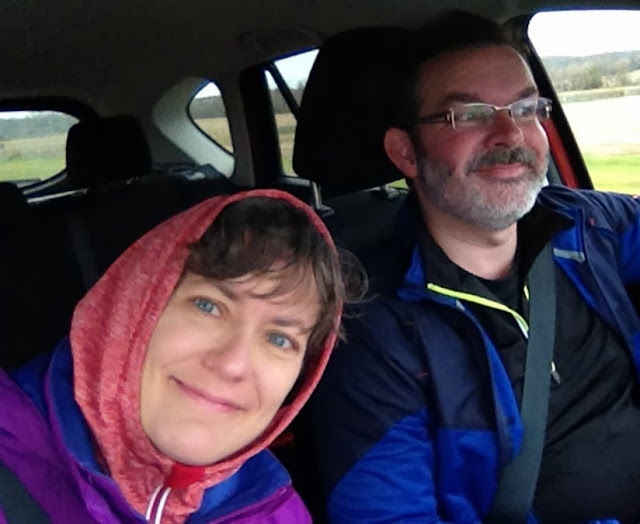 I think my next race will be a 10K. We have started running at 7 am, three or four times a week. I thought it would be very hard to get up and run in the morning, but it turns out we both love it! And we feel energized all day afterwards. For some strange reason, it's  easier to run in the early morning than later in the day, plus we get to watch the sunrise!

Soon enough it'll be dark outside when we do our morning runs but we've got lots of reflective gear and we have headlamps as well. Our road isn't too busy and we practically run in the ditch, so I'm not too worried about getting run down. I always run against traffic and keep an eye on all the passing vehicles but everyone around here is incredibly careful about people walking or running along country roads. People almost always slow down and pull way over (sometimes right into the opposite lane!) I always give them a smile and a wave when they do this. I even had a dump truck do it the other day. Yay truck driver! It's nice that people in this area still give a damn about their neighbours. :)

Running. So awesome! I never thought it would make me so happy to run. I used to have dreams about running, and I was always happy in them. My subconscious was trying to tell me something!

Sophie has something to say too...