Here is my beautiful Daphne last fall, in a picture taken by my friend Christina. 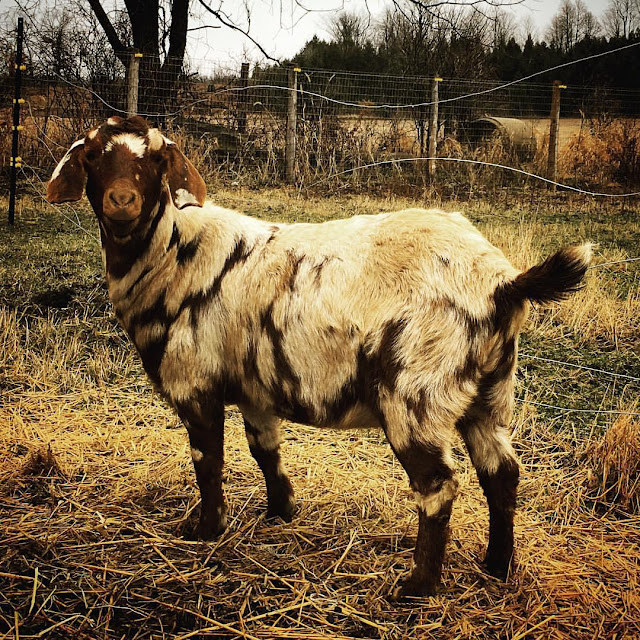 On the 19th, Daphne lost her twins and had to have a C-section. She seemed to be healing up reasonably well from that, but on Tuesday evening, I called in the emergency vet. She wasn't eating and didn't want to get up, and was clearly in pain.

Turns out she was bleeding internally! The vet now thinks it was some kind of burst/broken blood vessel, a post-surgical issue. He gave her a shot of vitamin K for clotting, plus B12 and red cells. Her gums and inner eyelids were white. :( She has been dewormed yet again.

Neither of us were too sure she would make it through Tuesday night, but she did. He came back yesterday to give her more shots, and thought her gums looked a bit pinker.

Her appetite was a bit better yesterday and today, although I thought she was weak tonight. Her stitches are supposed to come out shortly so I am going to get the vet back tomorrow to do that and check her over again. I took her outside for a bit and just sat with her under the roofed part of our  outdoor bird run while she munched hay. I think she was glad to lean against me as she ate. I'm relieved that she is interested in food, although I would like to see her eating more. Still she has been going at it steadily all day today, downing an apple and a carrot along with her hay and grain. She even ate part of a horse cookie!

I took her some pine and spruce boughs this afternoon and she was happily munching away on them.
I don't think she is out of the woods yet but I am hopeful. She has been wearing the dog coat my friend Jackie gave me, and it keeps her warm and comfy in her box stall. It is hard for her being separated from the herd, even when they are in the next stall or within earshot, but I don't want to put her back with everybody until I am sure they won't further injure her by butting her or poking at her. 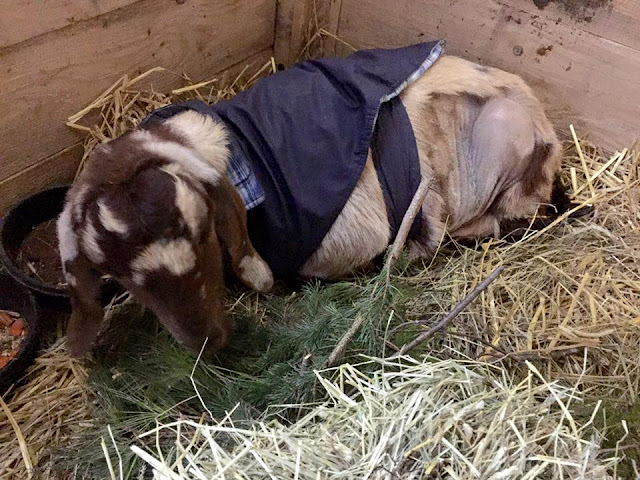 Please think good thoughts for Daphne. We love her and want her to get better! We've been through a lot with her the past two weeks (I believe I am up to 5 or 6 vet visits!) and I don't want to lose her now. As I type this, I have the barn cam on and am pleased to see that she is chowing down on hay. 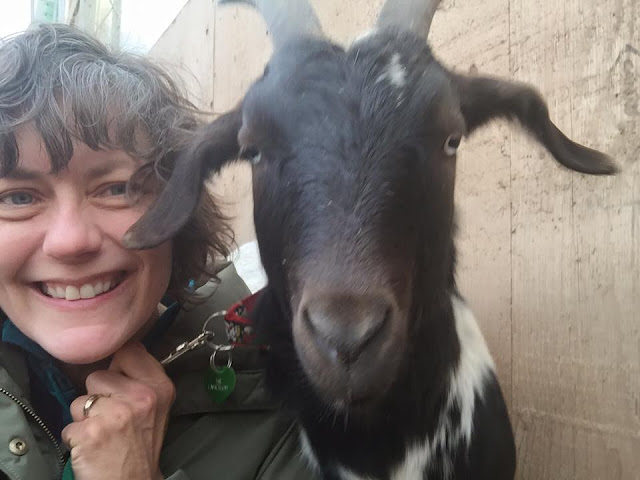 Lance belongs to my friend Jackie. When we went for our riding lessons yesterday, he was there, waiting to see the vet who was there gelding horses.

I found something out yesterday... 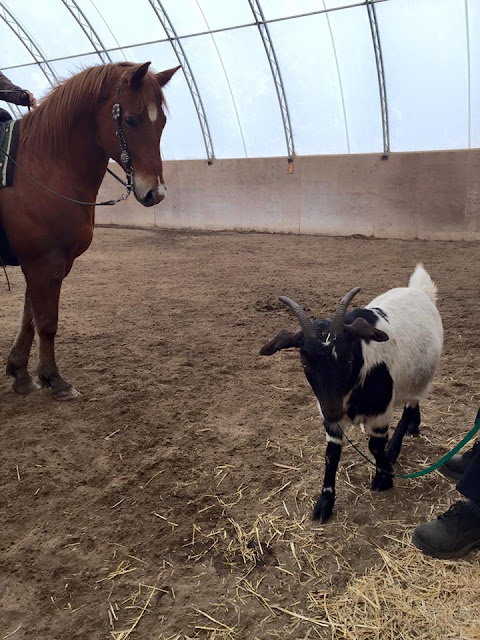 My horse Roo (you know, the one who I won all the ribbons with last Saturday?) is terrified of GOATS. Yes, goats. Yes, we now have 13 goats. Yes, Roo is supposed to come home to the farm this summer. The farm with 13 goats. God only knows what he thinks of pigs! 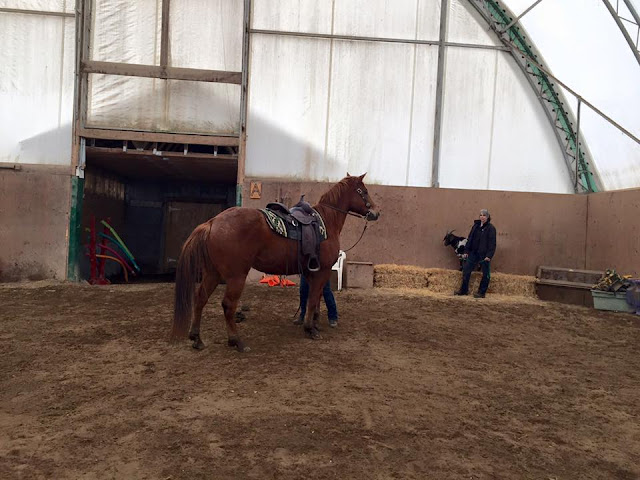 So I had a veeeeeery interesting riding lesson yesterday! Roo was so freaked out that my instructor got on him first and worked with him to calm him down enough not to bolt the minute I got on. 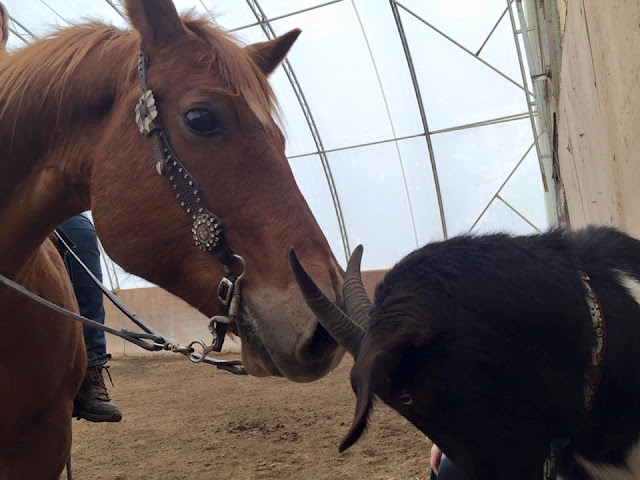 He was huffing and puffing and showing the white of his eyes, flaring his nostrils and sweating like a hog! This, the horse who has done a bazillion peaceful trail rides. The unflappable Roo.

BAHAHAHAHAHAHHAHA. All it took was a goat.

My teacher eventually made Roo go right up to Lance, who was not at all fazed by the horse. Roo, however, was freaked. It was a great riding lesson for me, if terrifying, because I got to practice my various safety skills, and desensitizing him to the goat. But even after Lance finally left the ring, Roo was still on high alert.

But hey, I didn't get thrown off or anything close to that, I did my spook circles, and by the end of the lesson, Gordon and I were practicing pairs riding with Sandy and Roo.

I have to tell ya, when I saw Roo going batsh*t crazy over the goat, I did not want to get on him. But I trust my instructor Linda and I know she would never put me in a situation she didn't think I could handle. So I got up there and rode it out! Didn't even lose bladder control! :D

Horses... just when you think maybe you're making some progress in your riding, BOOM! Along comes a goat. Well, really I do feel like I made a ton of progress yesterday, just by sticking with it even though my horse was jumpy and I was scared. 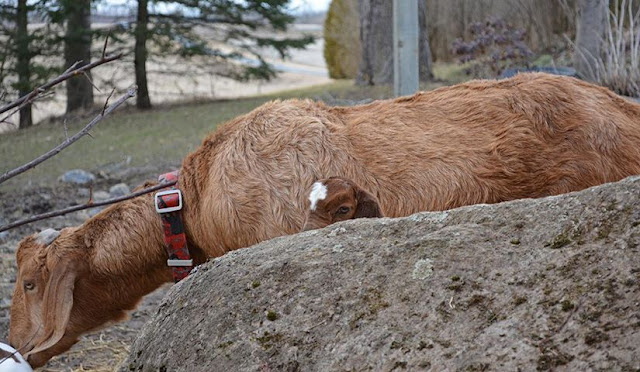 ...little Pierre was being a stealth goat between his mama Bambi and a big rock!