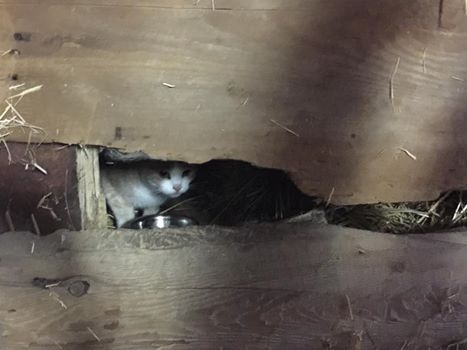 Millicent now comes when I call her but she is pretty skittish and has found a few hidey-holes around the barn. Yesterday I just fed her in one of them. She is getting along fine with the other barn cats, although Keaton chased her upstairs yesterday. Mind you, he does that to all the cats!

Now for the "irked"... a man dropped by on the weekend to see if I would take in two more cats that someone had dumped on his property. His family is allergic and he wanted the cats to be somewhere warm before winter, and the OSPCA doesn't have room for them right now.

Do I want 19 cats? Well, maybe if I had some full-time cat-servants here to help out. So I told him that I was sorry, but I couldn't take them because I already had 17. And he said, "What's two more?"

And he was a nice man, and I wish I could have helped because he was trying to do the right thing, but I do get a tired of this "You already have X number of

And then of course I spent most of Sunday feeling sad for the two cats I didn't save that day. I did encourage the man to keep in touch with the OSPCA and get them in there before winter, and I will ask around as well. But I know I could have 100 cats tomorrow if I never said "no."

And finally I got angry. I got angry at the morons who allowed a cat to breed, then dumped the offspring on someone who actually gives a damn, but couldn't keep them (this man says cats are dumped at his place every year. He also said these two cats are friendly, which means someone played with them and gave them attention before they were dumped.) I got angry at all the idiots who have dumped cats at our farm (Redford, Emerson, Naomi, Emily, Keaton.) I got angry at the people who were once kind to many of our cats, and let them know how it felt to be loved and cared for, then callously dumped or abandoned them (I'm not talking about the animals that came here from loving homes were the owner took the time to find them a new home when circumstances changed.)

I've had to work hard  to win back the trust of  neglected animals like these. It is something to behold when you see a scared cat like Millicent (abandoned to the elements when her owner went into a nursing home) realize that maybe she has a home again, maybe she can trust a human being again. The first time she purred while I cuddled her brought tears to my eyes. Her whole demeanour is now beginning to change. I just keep telling her that yes, this really is her forever home and she doesn't have to worry anymore. I hope she believes me.

And I'm angry at the people who get pot-bellied pigs on a whim, then dump them at the shelter because they start acting like pigs. Dogs, ponies, goats... the list of unwanted animals is endless, and their suffering is so damn unnecessary. I wish I could help all of them, because it breaks my heart to know animals are suffering. But I know my limits and Gordon knows his.

And of course I still can't get those two cats off my mind... it irks me that I am the one feeling bad about those two.