Lap chickens and other wonders

Gordon and I relaxed behind the barn again yesterday. The stinking heat and humidity has finally gone away (it was 34C/93F with a humidex of 44C/111F on Friday!) and there was a lovely breeze in its place. Charlotte the chicken (who turned 4 on July 9th!) just wanted to sit on our laps... 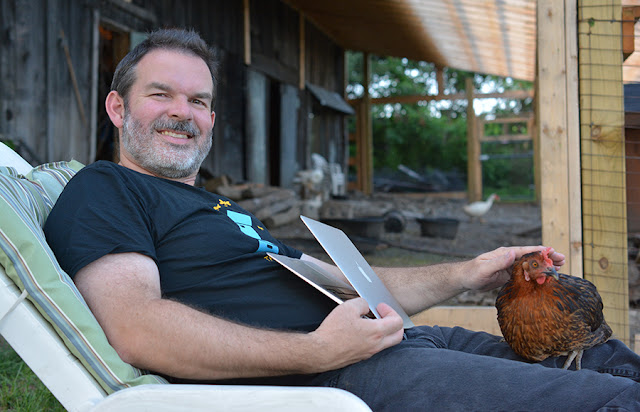 She was there with Gordon for over an hour, getting off once to poop and eat a little grass, then jumping back up. 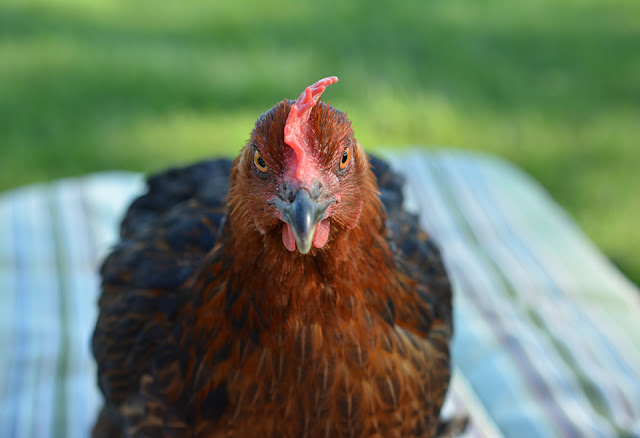 Charlotte loves to hang with people! 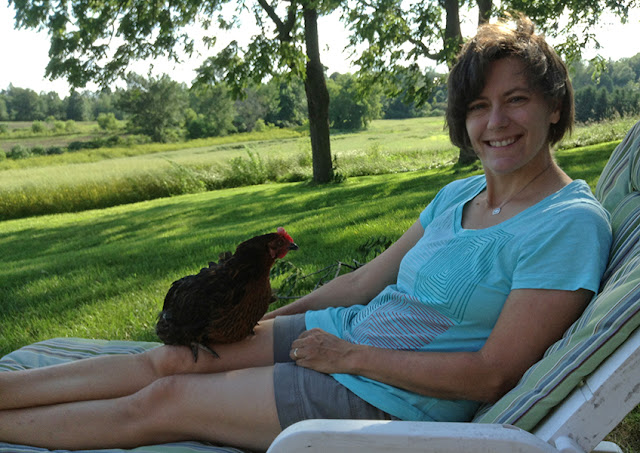 She sat on my lap for a good long time too! 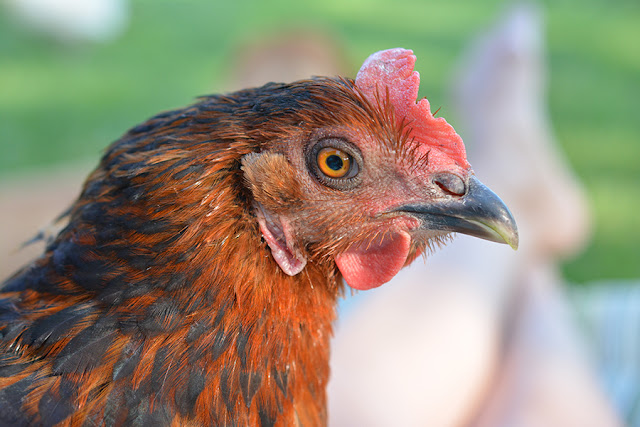 She's grown in a whack of new feathers and is looking quite fetching these days! 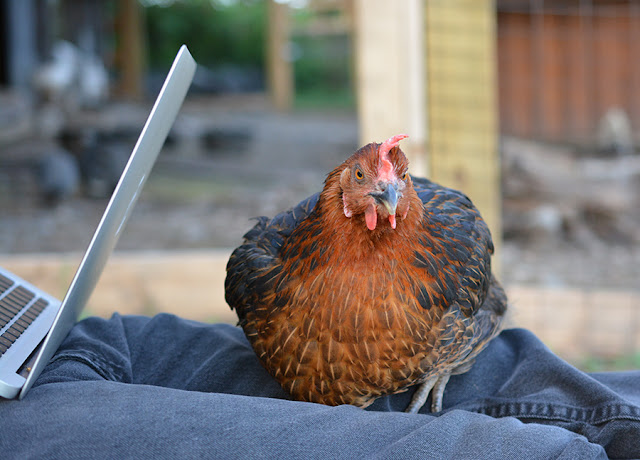 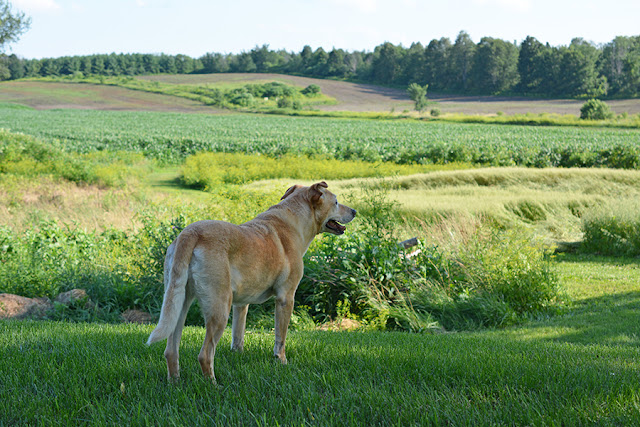 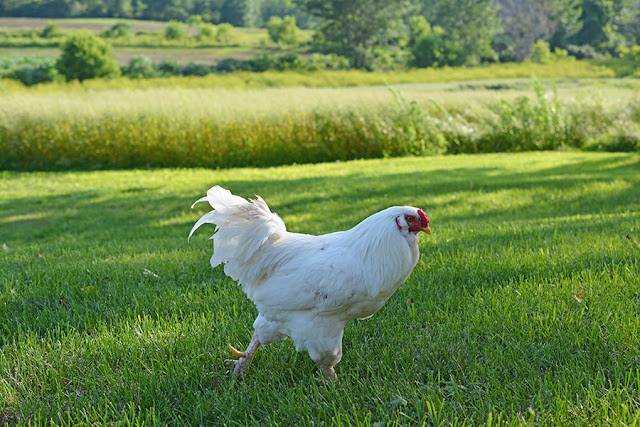 McGuinty the Chantecler rooster, on a mission 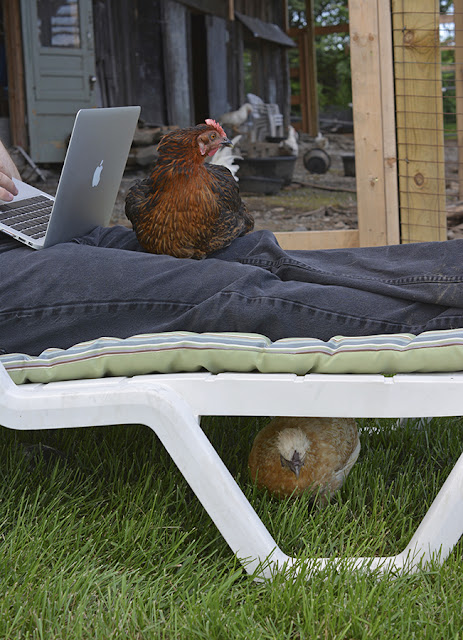 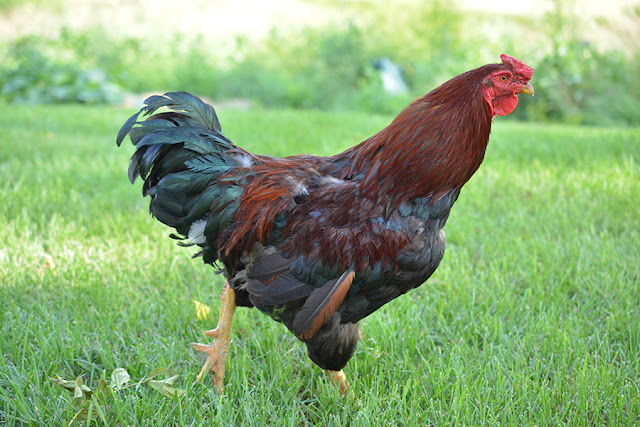 Zyedco the Partridge Chantecler rooster, no doubt in pursuit of feathered booty. 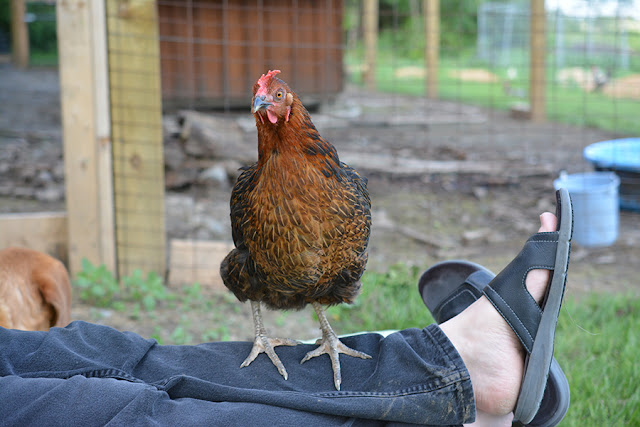 She looks right at home there! 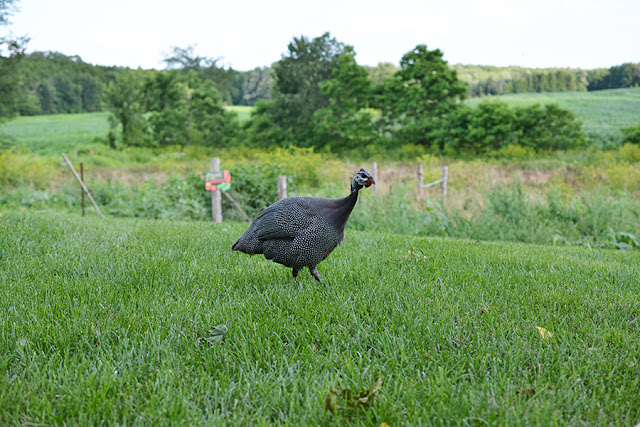 Guinea on the loose! 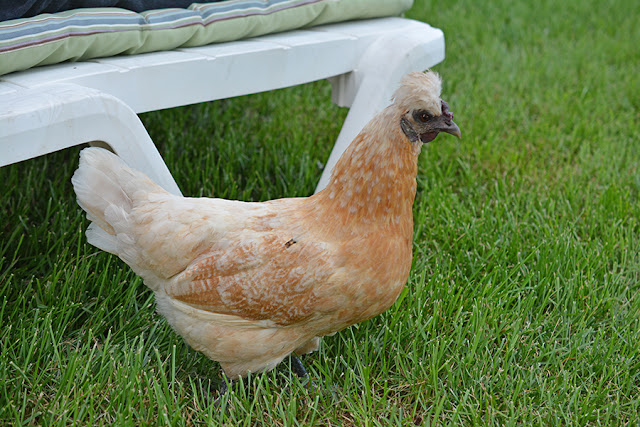 Georgiana, who is 3, has also grown in a new set f feathers and is looking mighty fine! 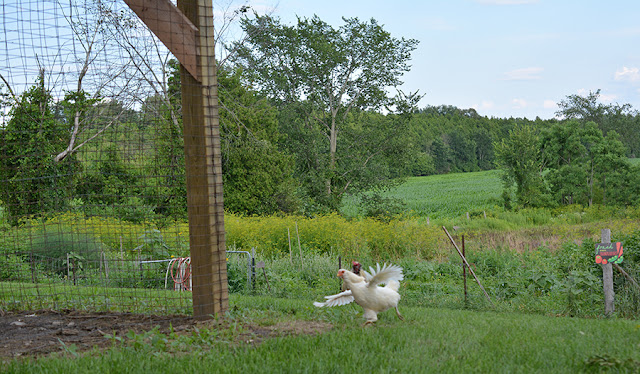 The this poor Ameraucana hen, who still needs a name. is being hotly pursued by Jams the rooster. 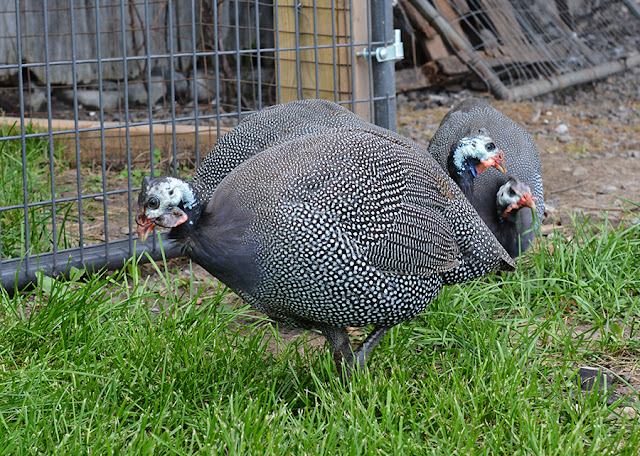 In no parrticular order: Widget, Fidget and Gidget. The guineas are getting braver! They came within two feet of me this morning thoroughly checked me out. 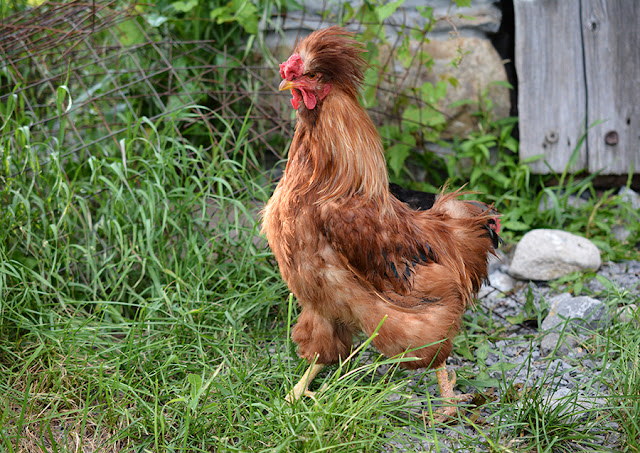 Beaker, who is missing some tail feathers. We nearly had a Beaker tragedy last weekend. Somehow, he managed to get himself caught upside-down in the chicken wire lining the baby duckling enclosure. I don't know what happened, but Gordon came down to find him there in the extreme heat, unable to free himself. After extricating him, we checked him over. He seemed to have strained his leg so we confined him for a few days. He is just fine now but we have no idea how long he was hanging upside-down in the hot sun. We also don't know what happened; maybe he got in a tiff with another rooster and managed to get caught in the wire during the kerfuffle? Who knows! I'm just glad he's okay. 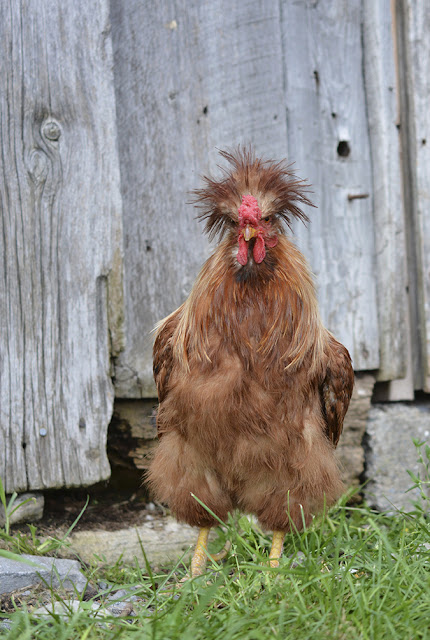 He's a cute little Silkie mix and we really like him. 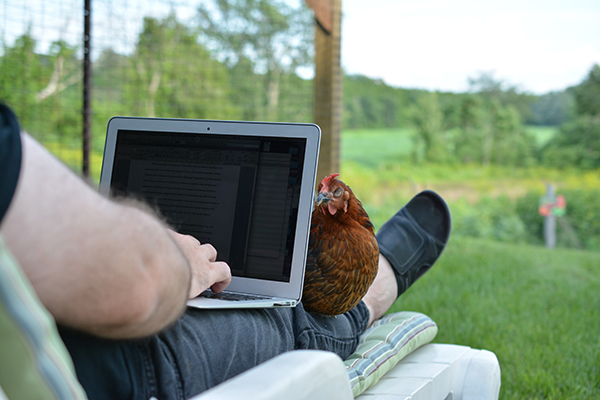 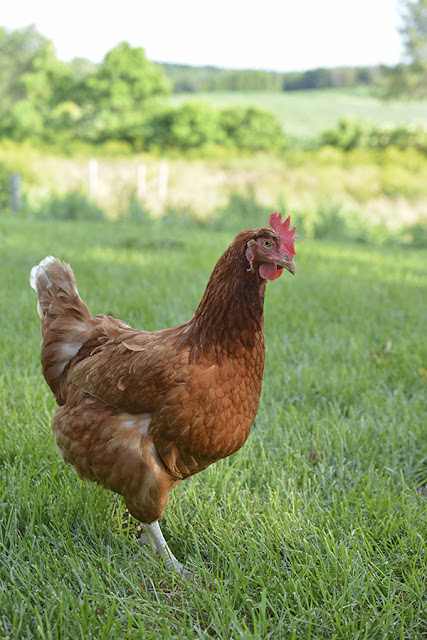 Lavinia checked me out. 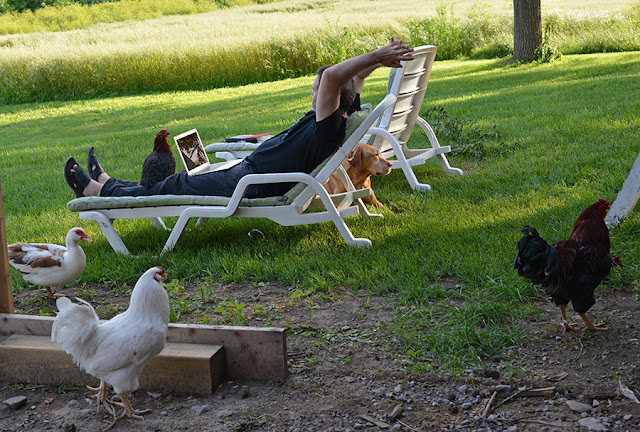 There are a lot of animals in this pic! 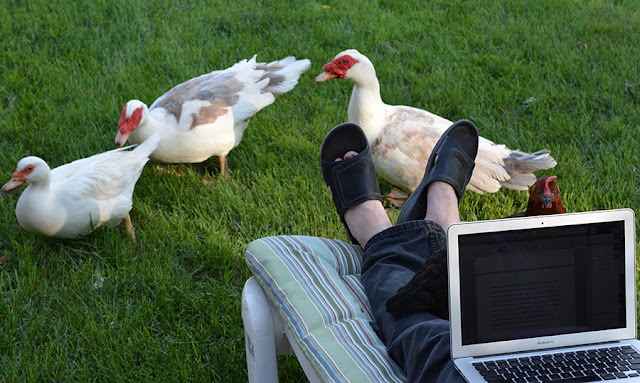 And the duck parage (Bianca, Moishe and Twitchy) wandered by while Charlotte kept an eye on Gordon. 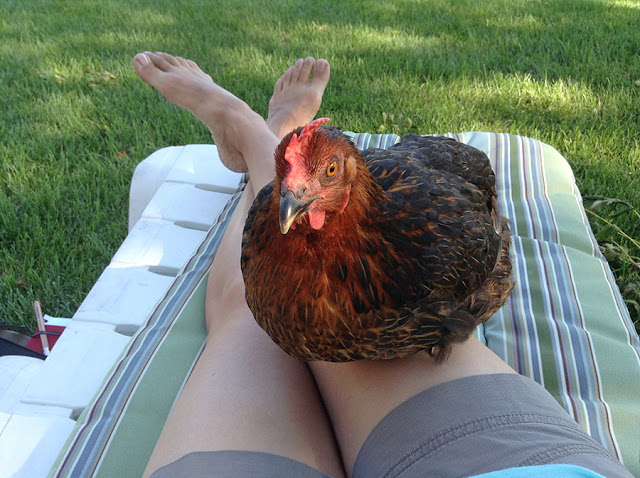 Meanwhile, in the duck coop, the eggs started hatching yesterday. The arrow points to the first crack in an egg. 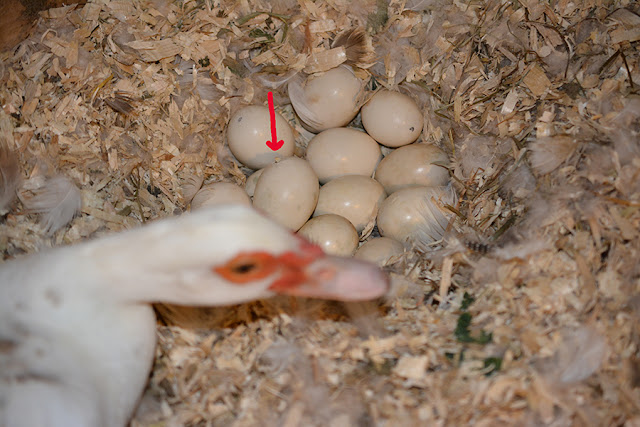 I went to check on Karène this morning and there is at least one duckling under her! I didn't want to bother too much, so I left her alone for now, but as soon as I have cute duckling photos, I'll post them! 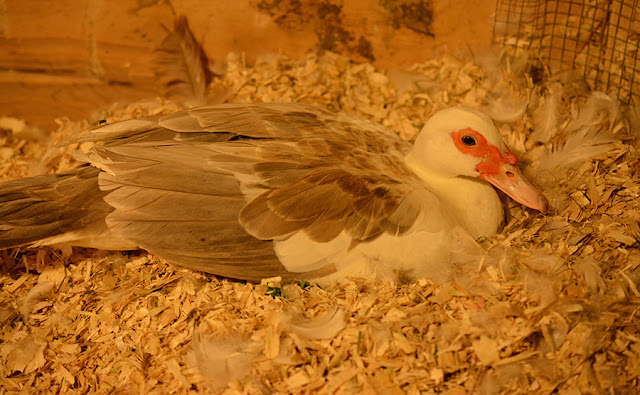 She's a first-time mommy and is doing a great job so far! 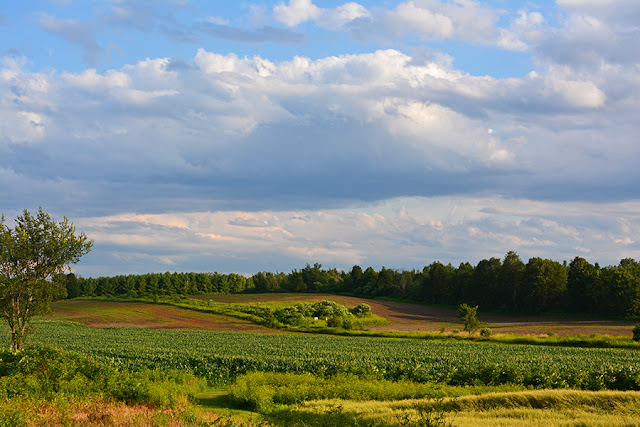 All in all, a lovely day. The corn is getting quite high. The native grasslands were seeded a couple of weeks back and things are beginning to sprout. You can see green patches appearing in the dirt in the pics above. The brown strip of land at the back of the photo have all been planted in grasses and wildflowers for Bobolink and Meadowlark habitat. 21 acres of fun!

Hope you are having a great weekend.