In case I haven't made it abundantly clear, I love my honeybees (not that I really own them... they are free spirits!) Right now honeybees are covering my sedum plants. I'm not positive they are from my hives, but the odds are good! Bees forage within approximately a three-mile/five-to-six kilometre radius of their hive. 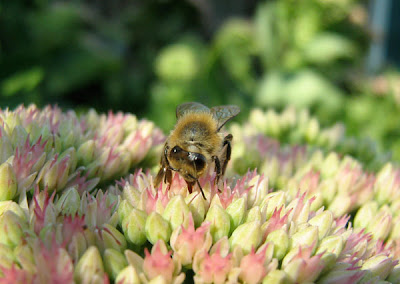 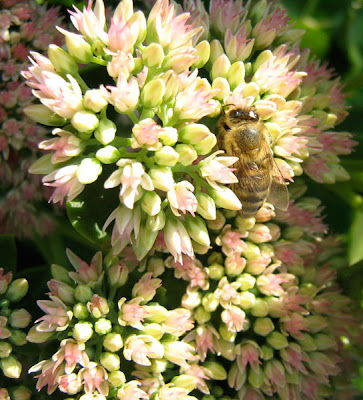 A worker (all workers are girls) forages in the sunlight. 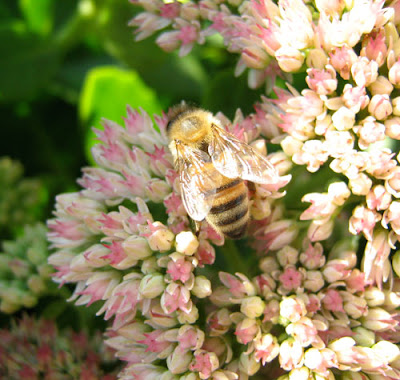 Honeybee workers perform many tasks during their brief lifespans (roughly six weeks during the spring/summer), first as "house bees" (working inside the hive) then as field bees (working outside the hive.) Some jobs overlap and are interchangeable.

A worker bee's first job upon hatching from the cell is to clean up the mess she left behind, so the cell is ready for the queen to lay a new egg in it, or for pollen or nectar to be stored within. The new girl cleans and polishes cells for the first three days or her life.

Her next job is as undertaker. During the next two weeks, our worker girl removes dead bees and dead and/or diseased brood from the hive. I often watch undertaker bees removing corpses from the hive, and flying off with them to dispose of the bodies as far away from the hive as possible. If something as large as a mouse or snake gets into the hive, the bees will first sting it to death, then (because they lack the strength to move something as large as a mammal!) encase the corpse in propolis (plant resin), which effectively forms a sanitary seal around the object and mummifies it.

Within this period, the worker bee also performs as a nursemaid, feeding and caring for the larvae in the hive. Larval bees eat pollen and honey combined to form "bee bread". Everyone gets a little royal jelly at first, but only future queen bees are fed royal jelly up until hatching.

Another job for worker bees during the second week of life is that of royal attendant. The queen is good for one thing: laying eggs. She goes out on one virgin flight, has sex with many drones, then comes back to the hive fertilized for life. After that, she spends her time laying eggs, with a constant throng of attendants who groom her, feed her, encourage her egg-laying, and even cart off her poop!

Around day 12 is when bees start foraging. They fly out into the perilous world to collect pollen and nectar as well as propolis, a plant resin used to mummify large invaders but also to seal up cracks in the hive and strengthen comb. When bees are out foraging on flowers, they are generally quite docile, so you can watch them at close range without fear of being stung. Honeybees in general are NOT normally aggressive. If they sting you, the stinger stays in your skin and rips out the bee's innards, so stinging = death for the bee, and is usually saved as a last resort. Bees get testy when invaders (including humans) try to steal honey from their hives, but out on the flowers, the bee-girls are focused on the task at hand.

For the record, if a honeybee is bothering you, the LAST THING you should do is swat at it, which is the most likely way to get yourself stung. Instead, just walk away from the bee until it leaves you alone. Occasionally one of my honeybees will get fed up with me sitting by her hive and will smash against my head, which is a warning. ("Piss off or I'm going to sting you, because you look like a threat to me!") They will also burrow into my hair if I push it, but when that happens, I know they're getting cranky and I just walk away until the bee gets out of my hair. I've yet to be stung, but I'm sure the day is coming. By the way, if you crush a bee, it emits an odour that tells any bee within smelling distance that it's time to bring in the troops to attack, because someone has done something very nasty the their sister and could be a threat to the rest of them.

By the way, bees don't like dark colours (you look like a big bear ready to steal honey from the hive), bad breath (especially the smells of garlic and/or alcohol), stinky sweat, rank perfume, leather and other animals products, or fast/sudden movements. Smart beekeepers bath before visiting the hives and don't down a pint of Guinness before opening the lids. 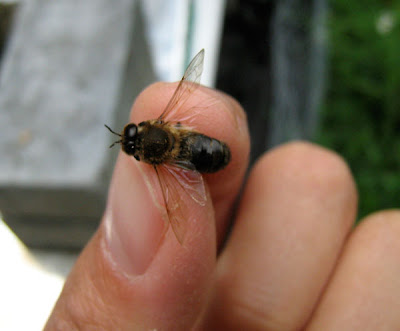 Dead drone, aka the male bee of the hive. Useless buggers whose sole purpose in life is to have sex with the queen and die. They can't even feed themselves!


Right, back to bee jobs. Bees also spend time fanning the hive, which controls the temperature and humidity levels. It also serves to remove excess moisture from the honey as it cures.

And let's not forget the honeybee's amazing ability to construct honeycomb! By the time the girls are 12 days old, they can make beeswax, which comes out in white flakes from special glands under their abdomens. They magically know how to build beautiful honeycomb, the six-sided cells being the perfect shape for the needs of the honeybee.

Another job taken on by a worker bee, around the age of days 18 to 21, is that of guard. Guards sit at the entrance to the hive keeping out intruders like hornets and wasps, not to mention bees from other colonies (although a confused and pollen-laden bee is often amicably allowed to pass.) Sometimes bees from other hives will buy off a guard with some nectar in order to gain entrance, steal some honey or pollen, then go home!

After three weeks of life, the honeybee is finally ready to hit the fields and forage. Young bees take orientation flights to memorize the location of their hive, flitting around the entrance to the hive as they look at it and imprint it on their little bee brains. Being outside is dangerous: bees are picked off by birds, other insects, car grilles, crazed individuals wielding cans of Raid (the stuff of Satan, by the way!!), you name it. Eventually the poor worker bees simply wears herself out and dies, wings tattered and body hair worn off.

(I used to have the timeline of a bee's life memorized, back when I taught about bees at the Natural History Museum in Nova Scotia, but today I had to have a look at my copy of Beekeeping for Dummies to jog my memory about what jobs are done at what ages. Great book!)

And let's not forget the men of the hive: drones.
Drones are the layabouts of the hive. They lounge around doing very little, while being fed and cared for by their sisters. Their job, as I mentioned, is to go out and impregnate the queen on her one high-in-the-sky virgin flight. The sexual organ of the drone snaps off in the queen and he plummets to the ground, quite dead.

As fall approaches, drones for the most part get the boot: with no mating on the horizon, they are pushed and dragged from the hive (and occasionally beaten up) and left to die outside. The guards won't allow them back in, and because they can't feed themselves, they soon starve to death, as probably happened to this poor lad: 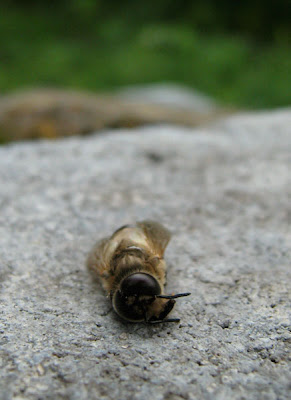 Drones have huge, wraparound eyes and the best vision of any of the bees in the hive. This makes it possible for them to find Queenie on her nuptial flight and do the job for which nature designed them!

So there you have the life cycle of the bee, and if you're still reading, I applaud you! Now, a few pics from my last visit inside my two hives. Things are okay but not spectacular. One hive is definitely doing better than the other.
Here is a not-bad frame of comb. The cells with the flattish yellow-brown covers are worker bee larvae that have been capped and are finishing up their development into bees. Drone brood looks similar but because drones are bigger, they have domed caps on their cells! 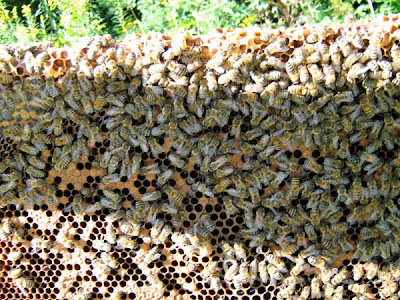 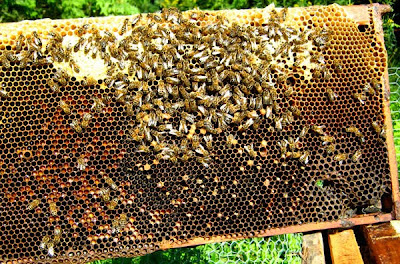 This frame ain't magnificent, but it has some capped honey at the top (the whitish stuff is wax covering the honey), a bit of brood, and some pollen (the coloured stuff in the cells on the left. I think there are some drone cells in this pic too. 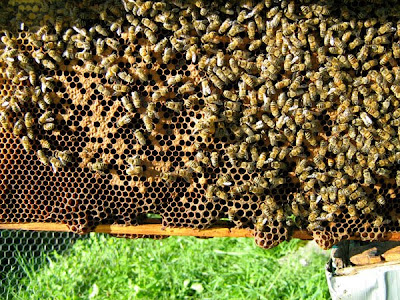 Another shot of a less-than impressive frame... they should be filled with honey, brood and nectar and pollen in a specific pattern, of which this is not a great example: 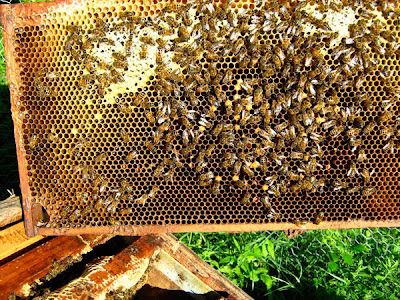 My two hives had a hard season. They had a late start, the weather this summer was abysmal (witness the almost complete failure of my 40-plant tomato crop due to late blight), and both hives killed their queens at least once and made new ones! My beekeeping mentor is going to help me move both hives into our barn for the winter, to give them some extra protection against the cold this year. We'll see if anyone survives!

Hope you enjoyed today's rather-lengthy bee lesson. Remember, honeybees are important to us all, mainly because of the pollinating they do. It bee-hooves us all to be kind to them and appreciate what they do to keep the world turning. Do me a favour and try not to kill honeybee and bumblebees, okay? They are wonderful, fastidious, fascinating little creatures who deserve our protection.