So I spent four straight days in mental anguish because I thought this guy was dead... 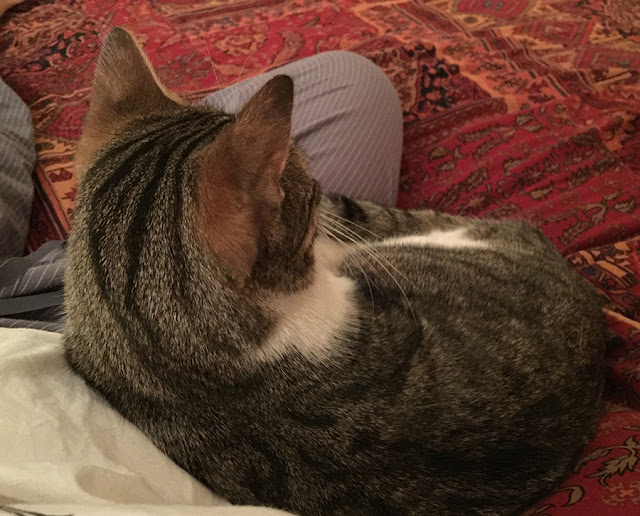 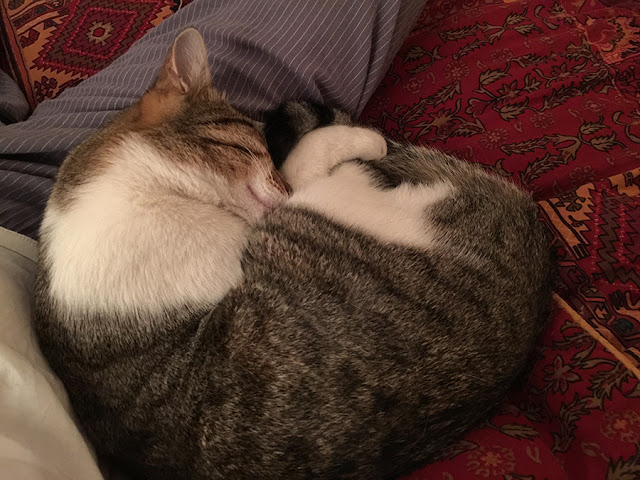 I spent a lot of time roaming 86 acres of farmland, calling his name. I waded through soybeans, walked through the cornfield next door, and drove through the woodlot. Nothing.

I sent him mental messages to come home. I cried a lot. I figured for sure he was dead and I regretted my decision to have any outdoor cats after years of having only indoor cats (with an outside cage which is still used by the indoor cats!) 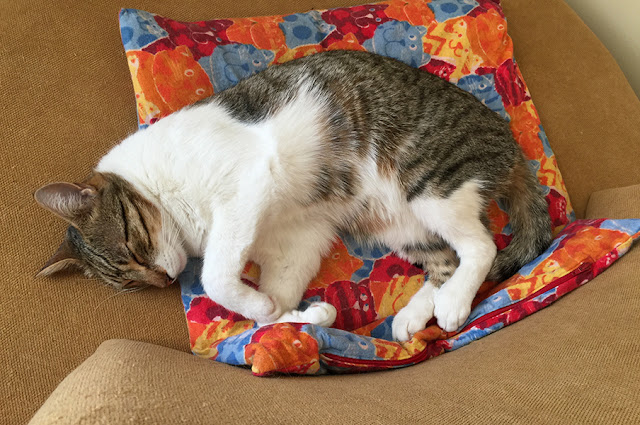 Then last night we went out for supper and I told Archie (in my head... what the hell, it was worth a shot!) to get his ass home and that I would turn on the big floodlight for him when we got back from supper so he could see his way home if he was lost.

So we got home around 9 pm, and I turned on the floodlight. A few minutes later, who do I hear meowing as he saunters out of the woods next to our house?

Yep, Archie. He has lost weight but otherwise seems fine. And I can't deal with this crap, so we intended to expand the cat cage network we've already got so the cats that aren't officially barn cats can just stay the hell inside. Only Redford and Emerson do any wandering from the barn and it would be really hard to lock them up given all the people going in and out of the barn. They are usually home for supper. But I'm not cut out for this "disappearing cat" crap! I am just grateful Archie is home and he can stay the hell inside or use the cat cage from now on.

He was initially a sort of barn cat who moved into the house so there was some laxity about his comings and goings, but that's that. He doesn't want to go out in winter anyway. If he wants some fun, he can spend a night in the barn partying with his buddies in there!

Meanwhile, we are in a drought here and the crops around us are failing. The cornfield next to us is pretty much toast. They will still use it for silage but it won't be as nutritious. Our rainfall amounts have been way down since April. My trees are suffering and my perennials are dying but at least I don't have to worry about crops. Today was stinking hot and tomorrow it's supposed to be 35C/95F with a humidex making it feel like 42C/107F. This is the hottest, driest summer I can remember in my lifetime. I worry about our well but so far it's hanging in there. But other wells around here are failing. My friend Pierre is having water trucked to his house now.

And I worry about the animals all the time when it's like this. The pigs know how to keep cool, though... 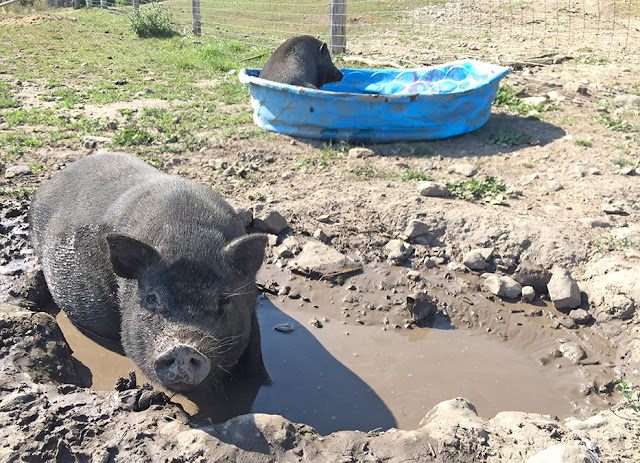 Dahlia wallowing as Jersey chills out in the pool. 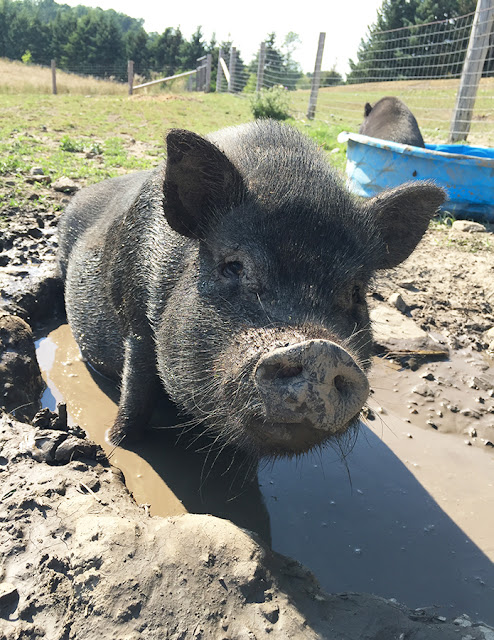 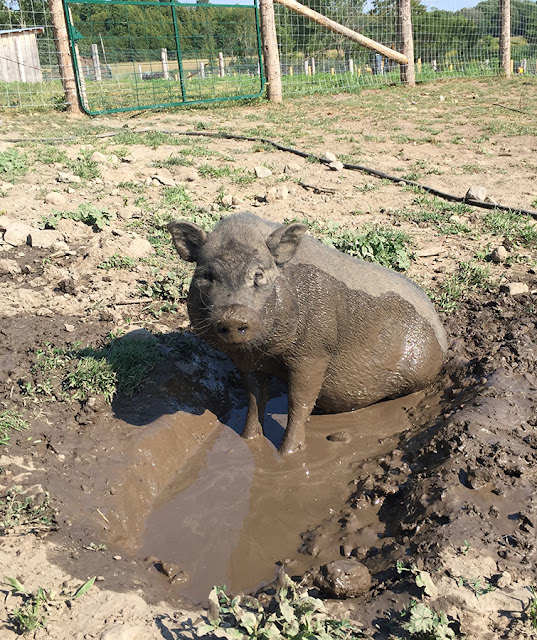 He's very sweet! He is finally starting to hang with the herd and the others are being mostly kind to him now. 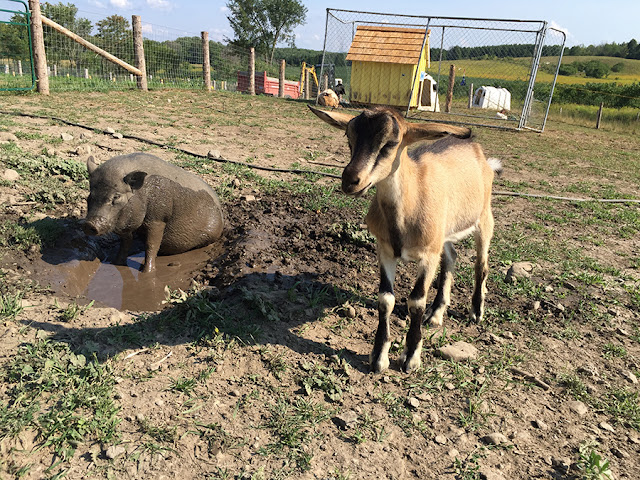 Little Bert likes to hang with Patrick too! 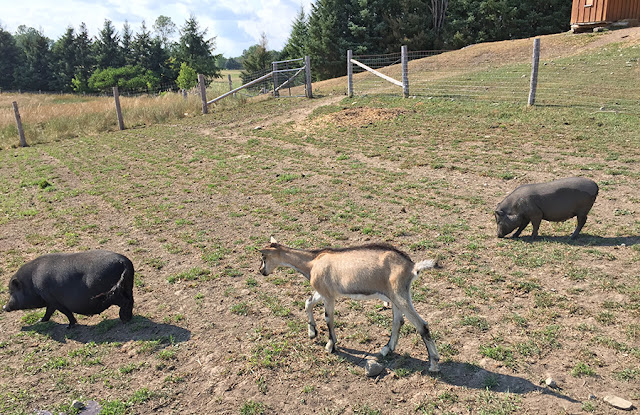 After mud baths, Jersey, Bert and Patrick wandered off down to the pasture. 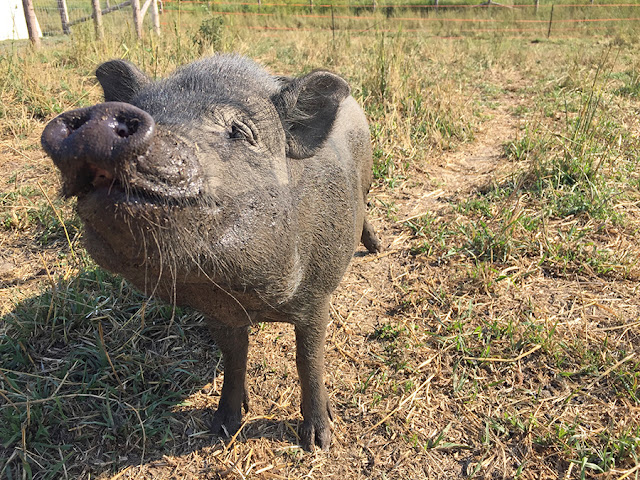 Doesn't Patrick have a nice smile? 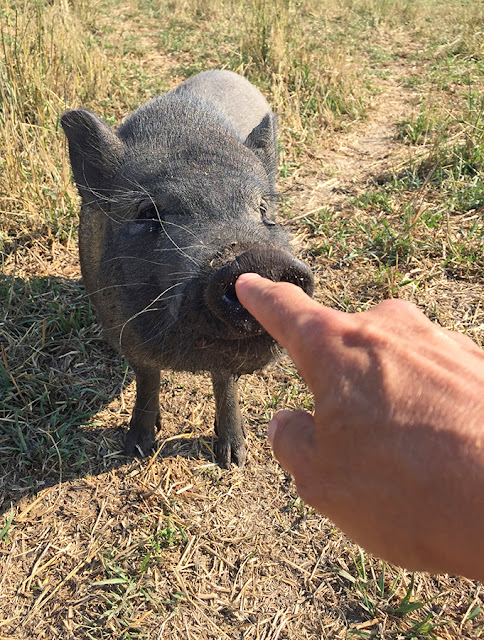 He's a cutie for sure! 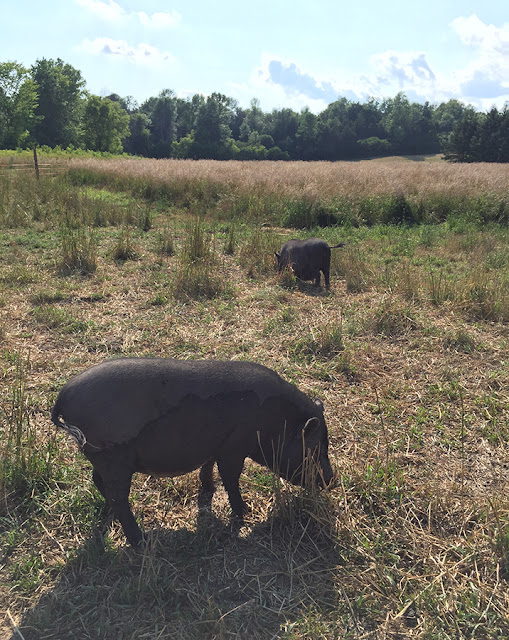 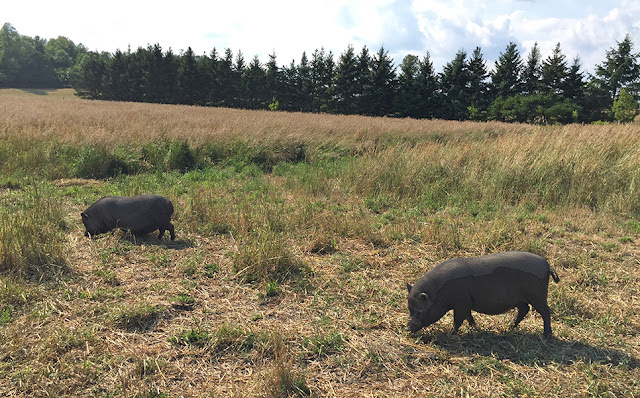