Gordon spent most of the weekend working on the chicken coop he's building. We're putting it in the lower part of the barn, where the previous owner used to keep meat chickens. Because we're getting laying hens, we need to build a better coop that will keep them going through the harsh winters.

I walked down Friday to see that Gordon had knocked out a wall! Not that the wall was much more than some nice barnboard and some ugly plywood-type stuff... 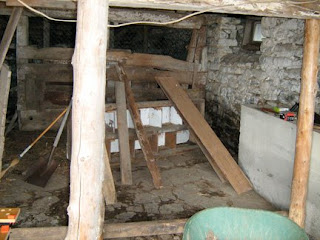 Here you can see the old nesting boxes (or whatever they are called... I guess I should know, eh?) for hens of days gone by. 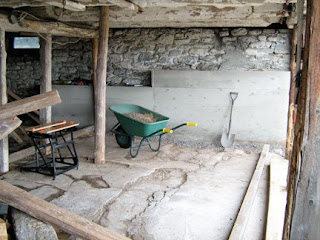 The former owners put a lot of work into fixing up this barn, which is about 150 years old. The floor of the coop is concrete, as is part of one wall. 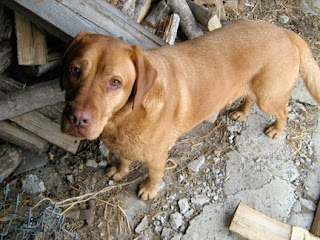 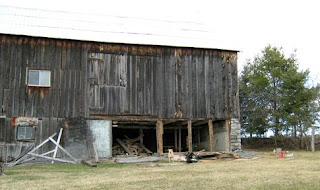 And Sophie guards the rubble from Gordon's destruction!

Gordon went to the Habitat for Humanity store and got himself a very sturdy door for the coop entry (inside the barn): 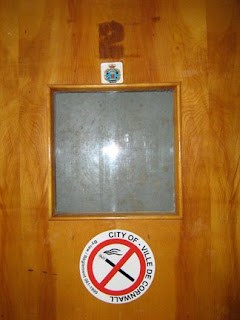 Yes, apparently it's a relic from a nearby police station... 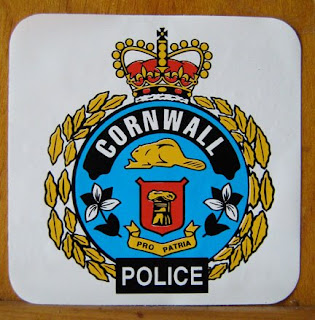 And it's always good to have a no-smoking sign in your barn! We wondered if the door was from some holding cell, given the big number two over the window.

On another note, here's a not-particularly-well Photoshopped-together picture of my veggie garden, awaiting clean-up and planting. 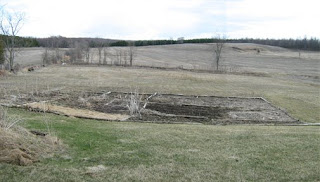 And on a happy note, I saw the proofs this weekend for the kids' book I have spent (on and off) the past 3-1/2 years illustrating! (It didn't take me that long to do the work, but there was a lot of down time that did not involve me.) The book designer is fantastic and it is very exciting to think that this thing will soon be in print. Katie of the Sonoran is a children's book about a western diamondback rattlesnake named Katie, written by my friend Kate Jackson. It's bilingual (English-Spanish) and is being published by the Sonoran Desert Museum Press. I assure you that the instant it's on Amazon, there will be a big fat blog posting all about it!!! I need lots of sales to finance my coming honeybee empire (the bees arrive at the end of May.)

Check out Kate's book for adults, Mean and Lowly Things: Snakes, Science and Survival in the Congo. It's all about her first Congo expedition, which is QUITE the story!
Posted by Knatolee at 10:37 am