Well, damn. We lost one of the farm's best characters yesterday. 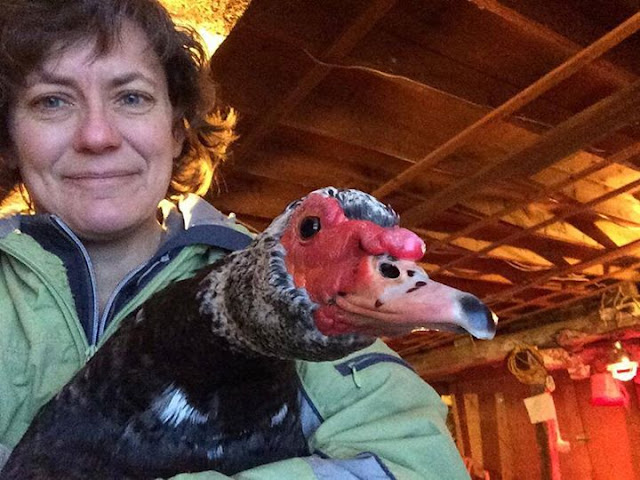 Rest in peace Warren, aka Vern, who was 13 years old. He came to us six years ago after retiring from his job at Upper Canada Village. 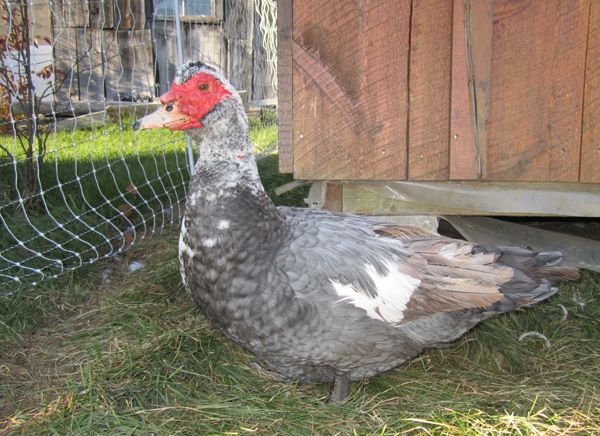 What a handsome guy, and such a nice personality. He has been a presence here for many years. I found him dead in the coop yesterday morning. It looks like he just keeled over in his sleep. Thirteen years is a pretty good life for a Muscovy duck, but I would have taken 13 more. Apparently he was actually named Vern, but someone at the Village was named Warren, so this guy got the nickname Warren as a joke, and we thought it was his real name. By the time we were corrected, Warren had stuck. The boys who raised him from an egg visited from time to time and still called him Vern.

Warren, aka Vern, you were a very good duck and you will be missed! xxooxx

As well this week, we had a whopping snowstorm that stretched over two days. Here's Roo at the start of it, looking a little snowy! 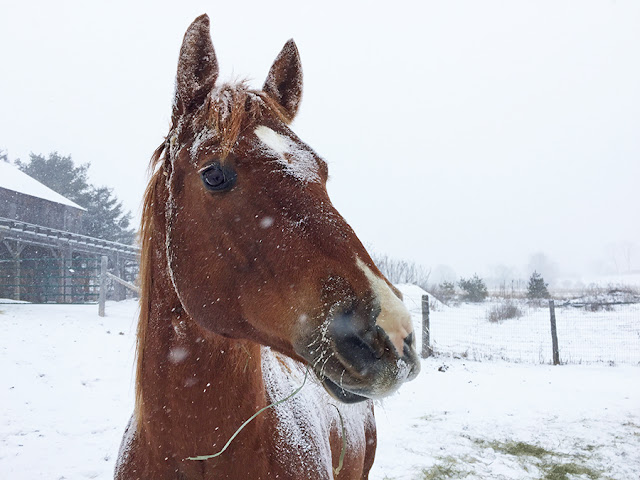 I believe we got just over a foot of snow! Thurday and Friday were sunny and beautiful, so I took my Nikon out for some pics... 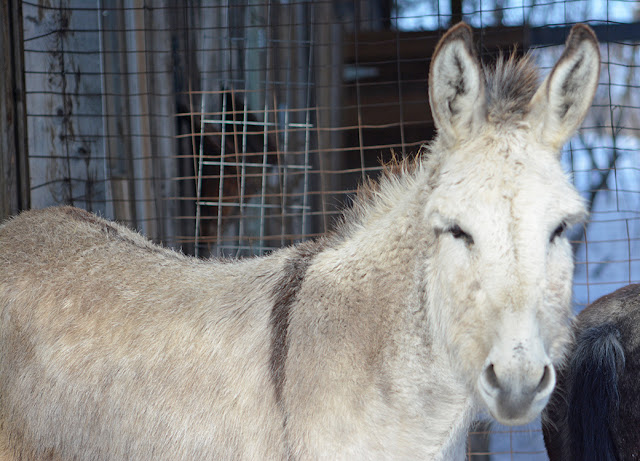 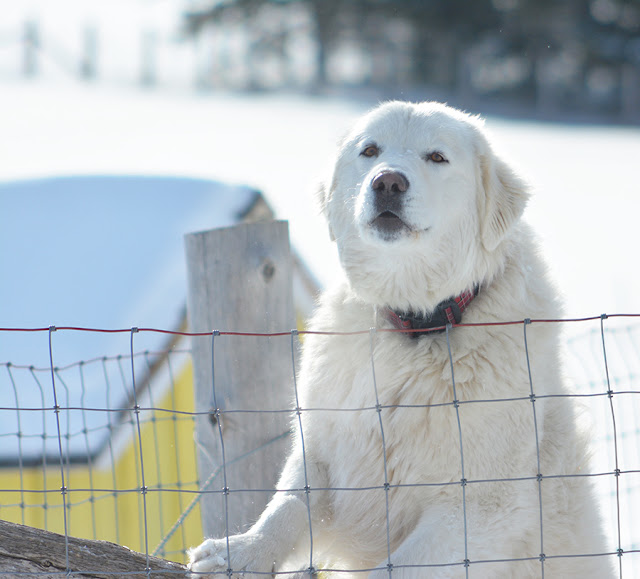 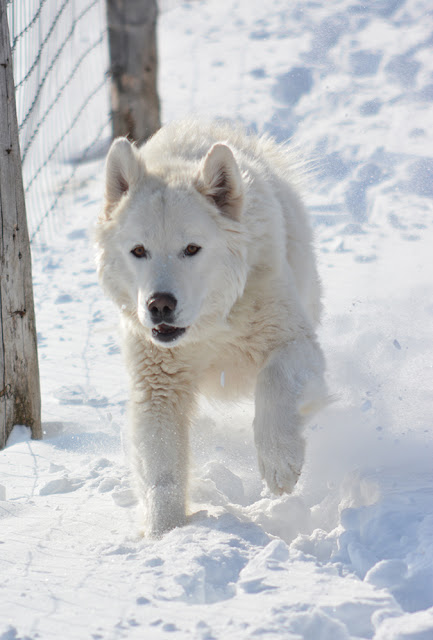 He looks like a wolf or a polar bear with his ears up! 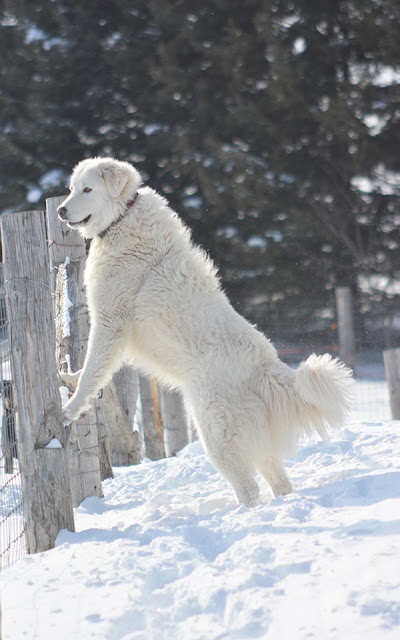 Watching the puppies play on the other side of the fence. He runs up and down the fenceline playing with them. 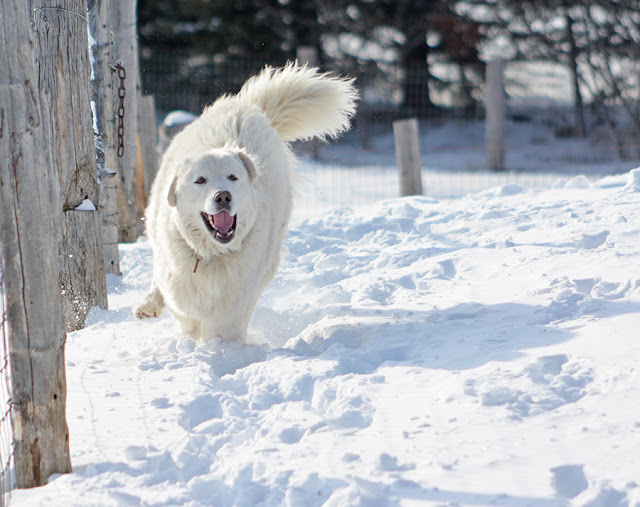 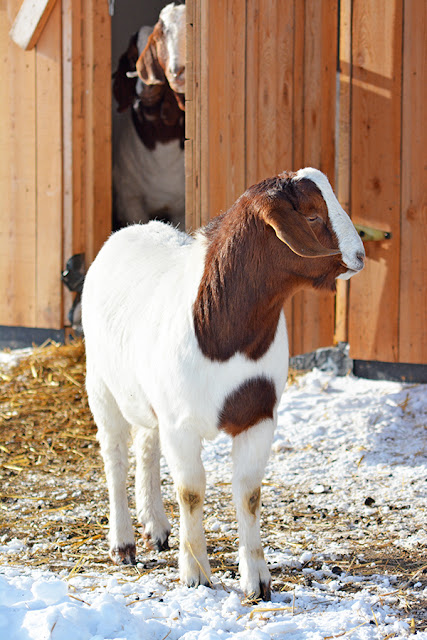 Hawkeye and his sister Debbie turned one year old on March 16th. And this week I finished a coloured-pencil drawing of Debbie as a kid... 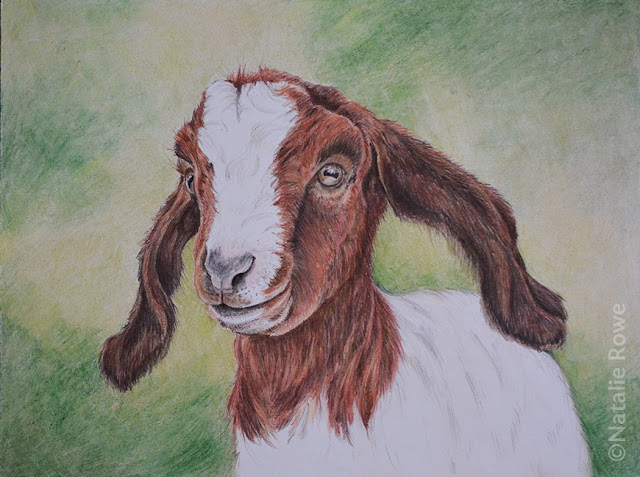 I am getting back into my art and drawing.

And this two cuties... 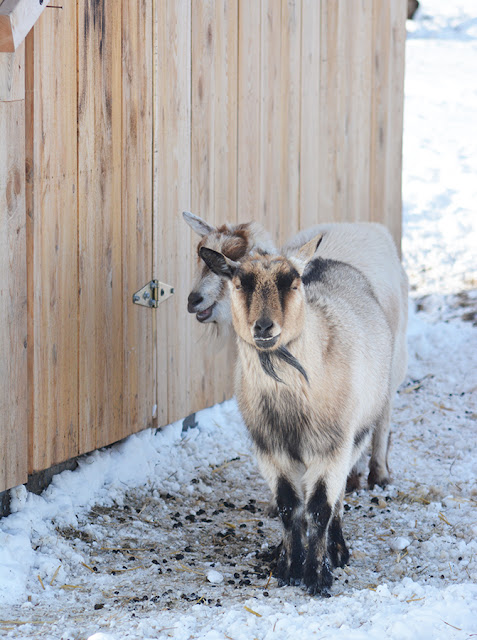 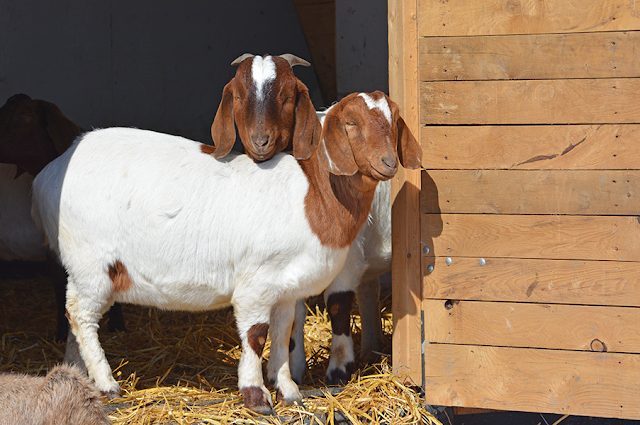 And Pierre and Emmeline, who turn one year old on Monday!

Meanwhile, Dodger has been dreaming of his homeland of Jamaica... 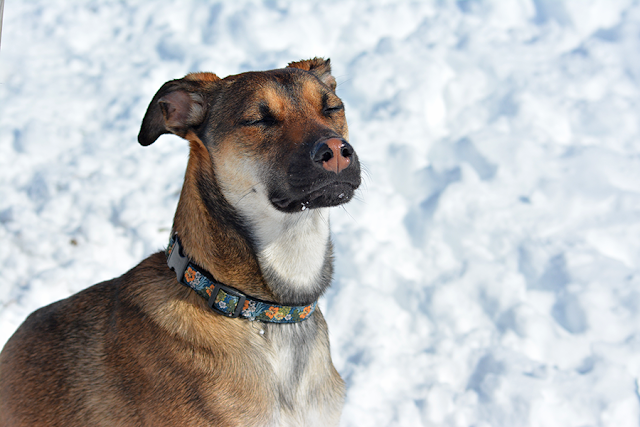 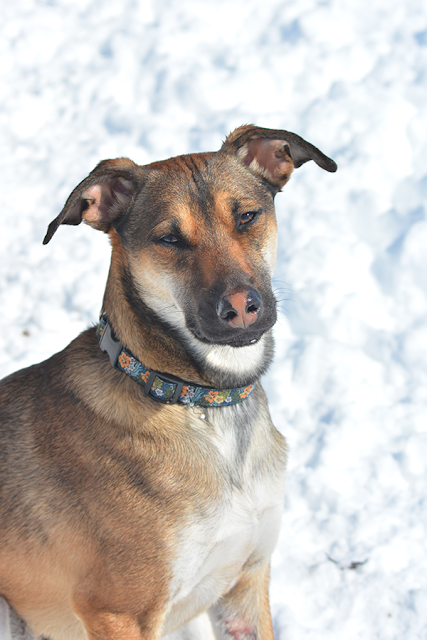 Such a good boy. 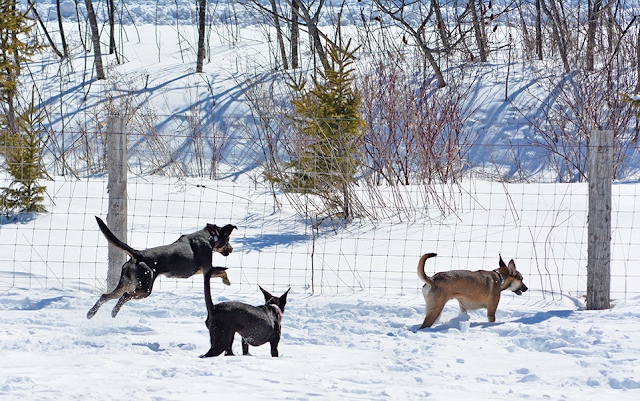 The Jampup loves playing in the snow! 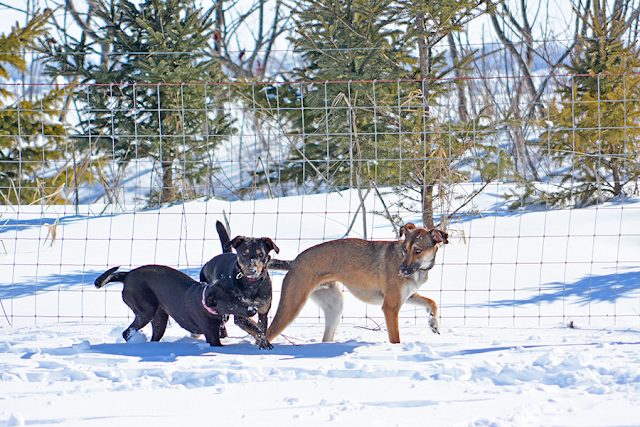 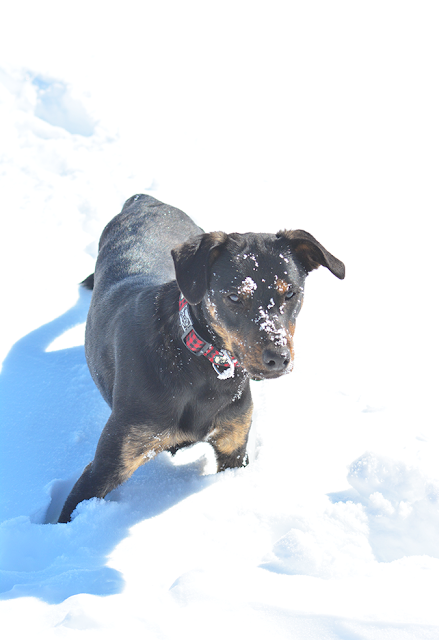 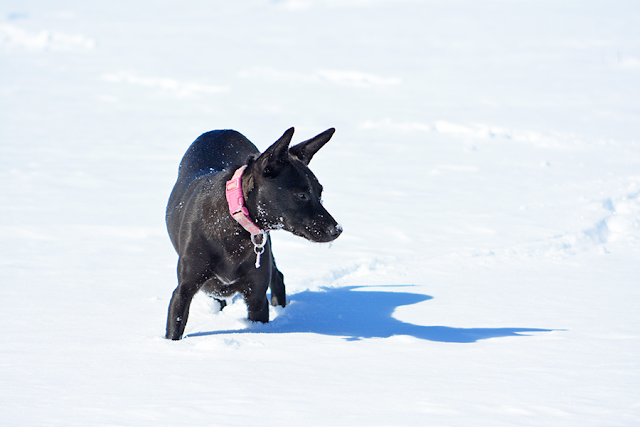 And snow or no snow, the robins have been out! 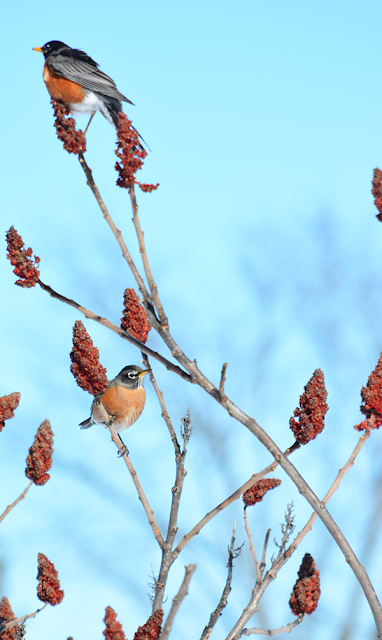 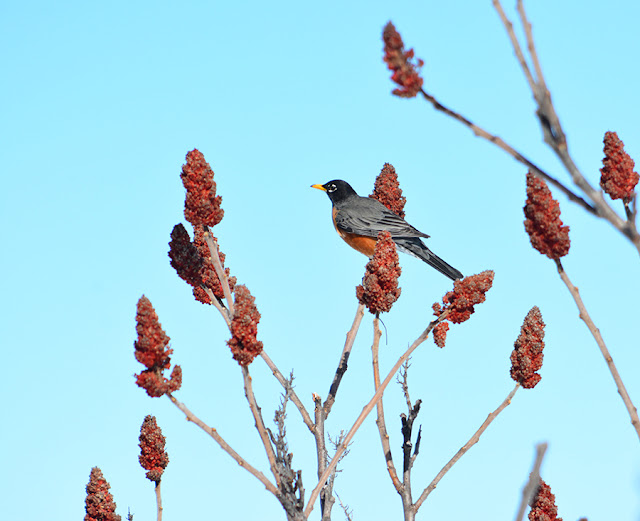 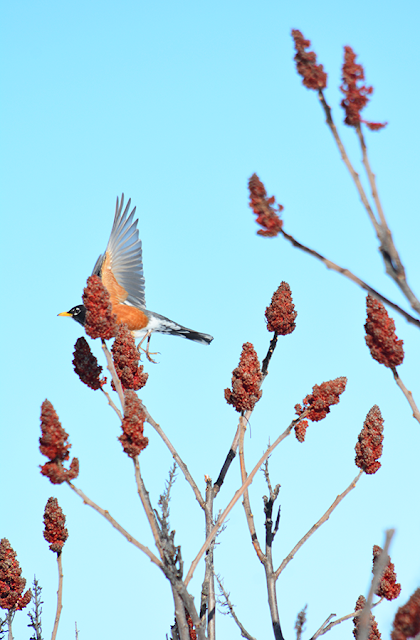 My head is doing okay, 4-1/2 weeks after falling on the driveway. Slower recovery than I'd like, but we're getting there. I am really missing riding my horse, but at least we can still spend time together... 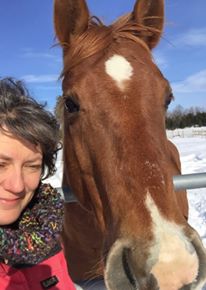 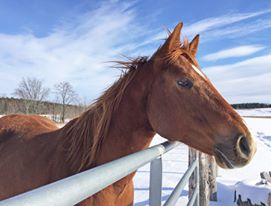 Hope you all have a good weekend!