Sorry for taking so long to post this! We had an absolute blast at the Harvest Festival at the Glengarry Pioneer Museum on Sunday. They held their first Rooster Crowing Contest. Guess who tied for first place? 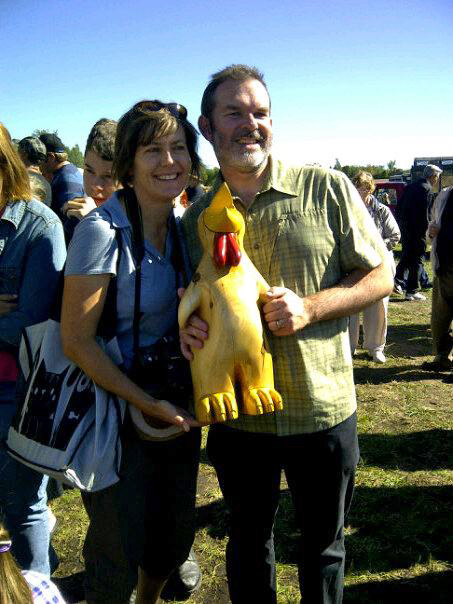 Yep, our rooster Errol Flynn! Thank you to our friend Christina for this nice photo of us.

Here he is with some of the local paparazzi.... 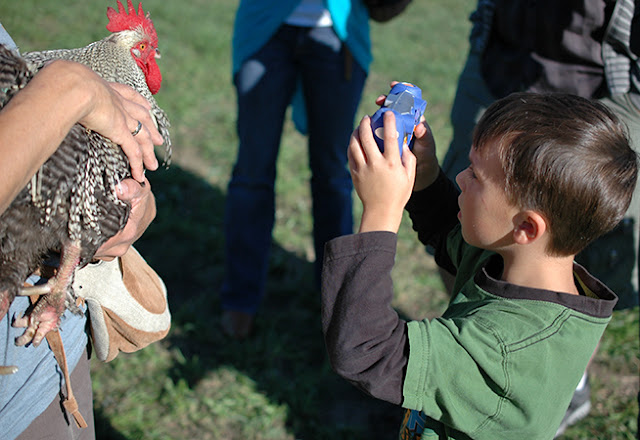 Sunday morning, we packed up Beaker, Lord Gaga, and Errol Flynn and drove them up to the museum. They were good as gold in the car! 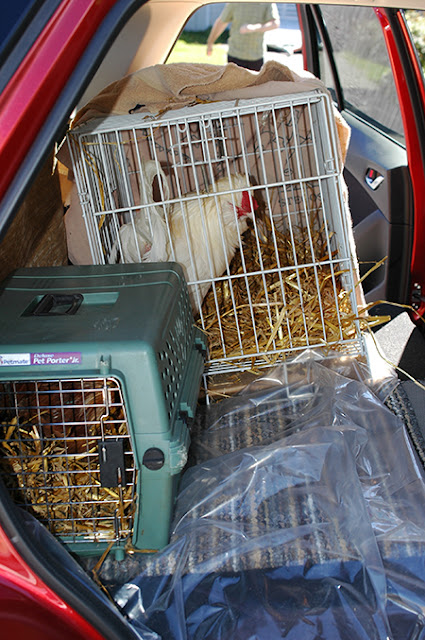 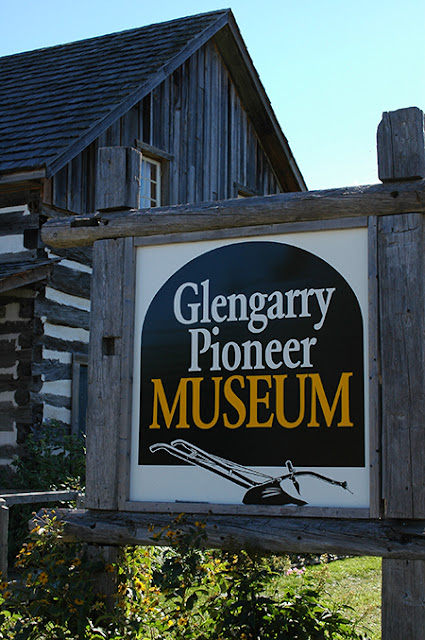 The weather was perfect! 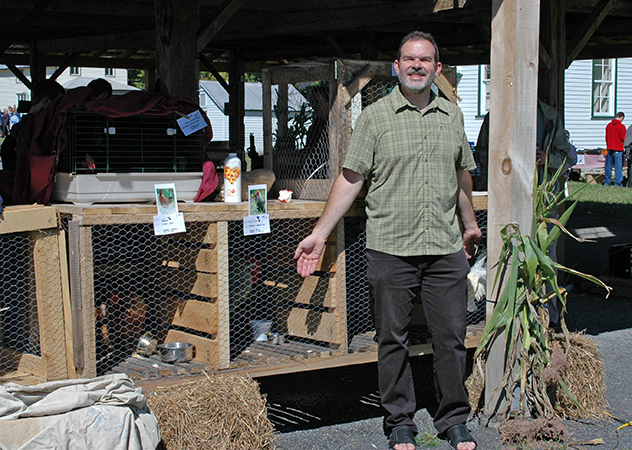 We got the boys settled in their cages. Gordon was a proud papa! 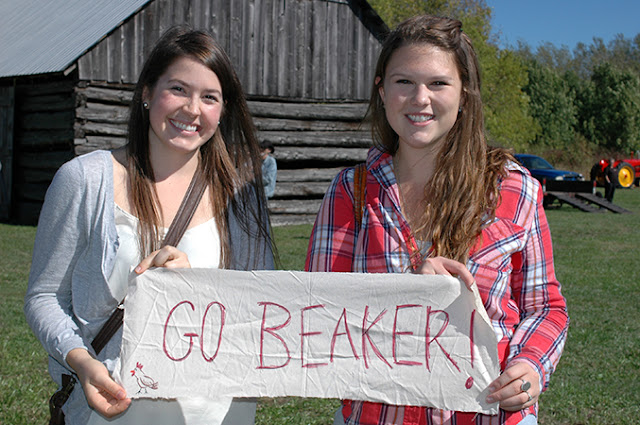 Our friend Christina (right) and her friend Hannah came with a banner to cheer on Beaker! Thank you, wonderful ladies!

Now, I would have put all my money on Beaker, but nope, it was Errol who took first. And guess who came in second? Lord Gaga (who we neglected to photograph, but I have some video for a later post!) I was one proud mama. They weren't the only winners. Because I have absolutely no shame, and am more than happy to humiliate myself in public, I entered the human rooster crowing contest. I am proud to say I won! Yep, all that crowing to my boys in the coop paid off. And my prize? 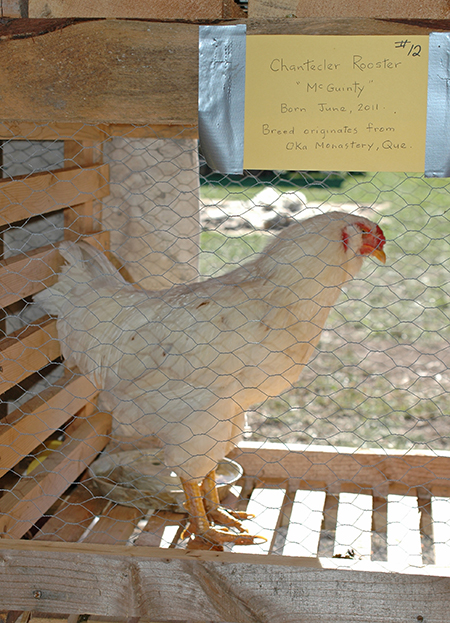 A wonderful Chantecler rooster named McGuinty (after our current Ontario premier, Dalton McGuinty, who is not at his most popular right now!)

Chanteclers are a rare breed that originated in Oka, Quebec. I have been wanting a few for some time, and guess what? I am also getting two Chantecler chicks in the spring! Two of the farmers there had a side bet over who would win the contest, and as a result, I won two chicks.

Our other prizes were a painting of a rooster, and a chainsaw carving by talented Gerdine Van Woudenberg.

There quite a few roosters entered... 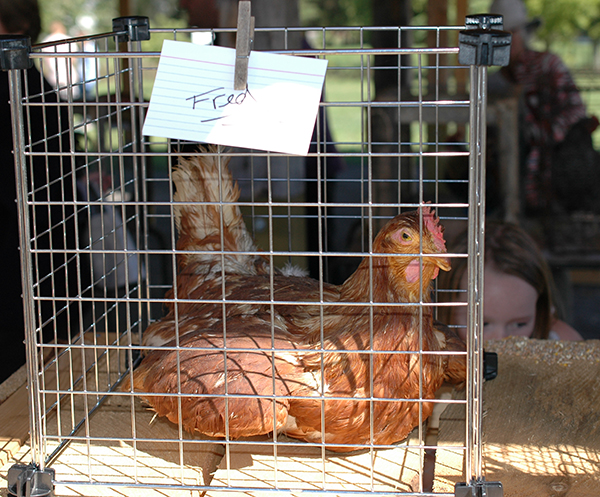 Fred, however was neither a rooster nor alive. But this stuffed hen had me fooled for a good ten minutes! I was wondering why Fred was so relaxed! 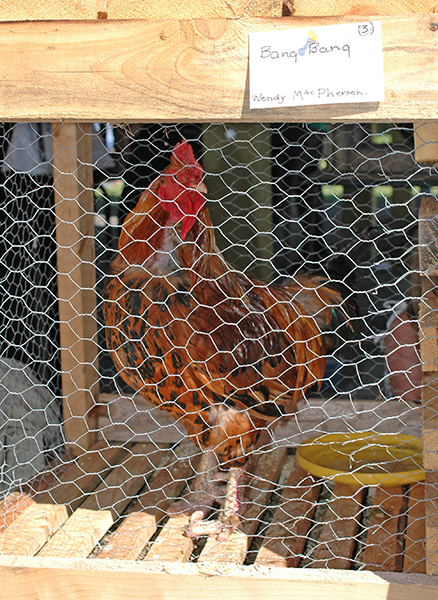 Bang Bang was a handsome devil, but alas, he didn't win. 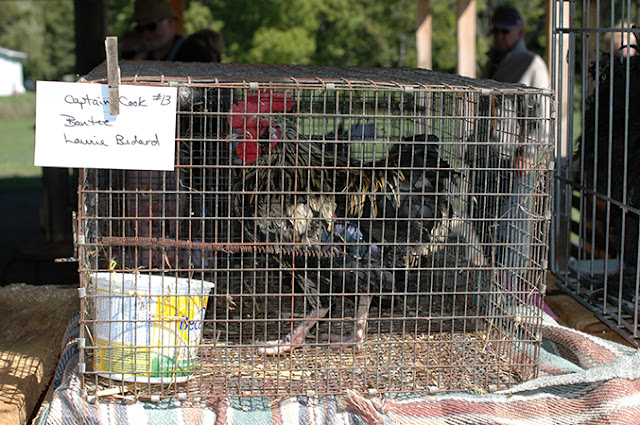 I'm pleased that I'm not the only one giving my roosters creative names. Captain Cook was a handsome little man. 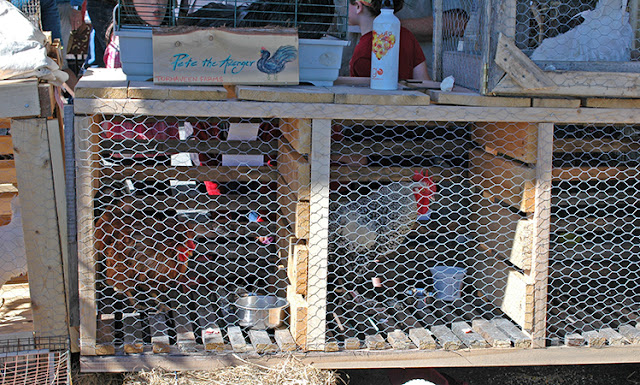 "Pete the Avenger" lorded it over Beaker and Errol! 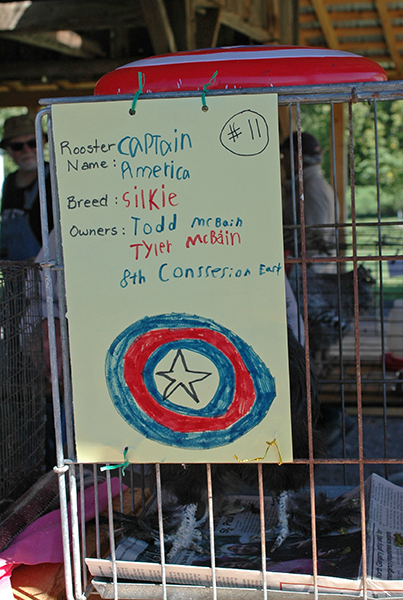 ...Captain America, a rather shy Silkie! Loved the signage, Todd and Tyler!

And as if the roosters weren't enough, our darling godson Ben and his parents showed up. Ben has teeth now, and likes to ride around on Daddy's shoulders. 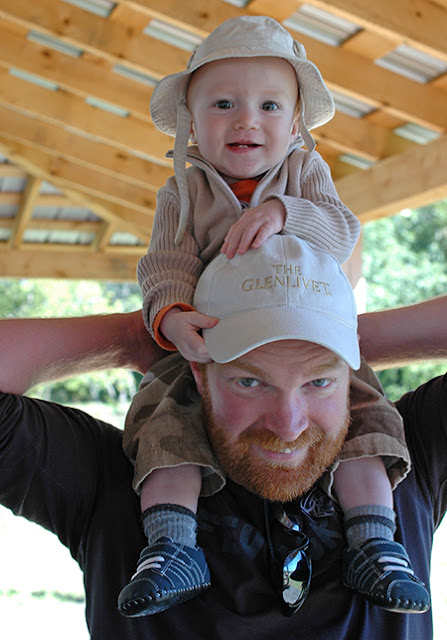 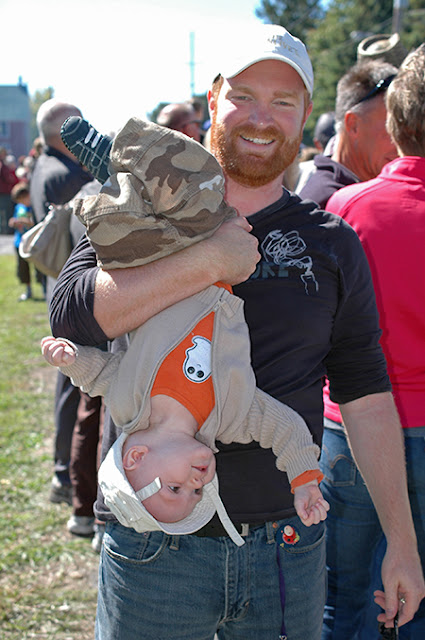 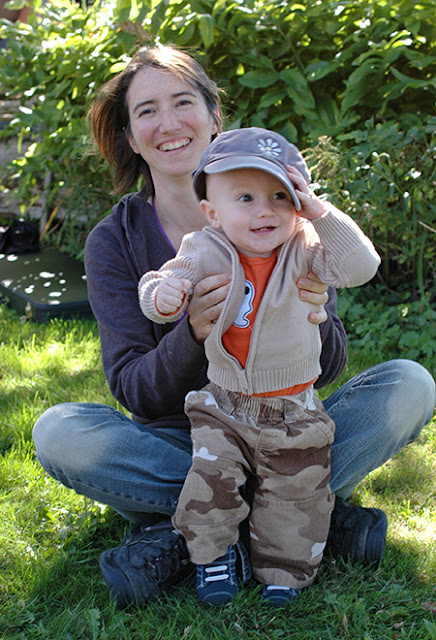 Yes, I have the cutest, sweetest godson on the planet! I'm very fond of his Maman and Papa too. 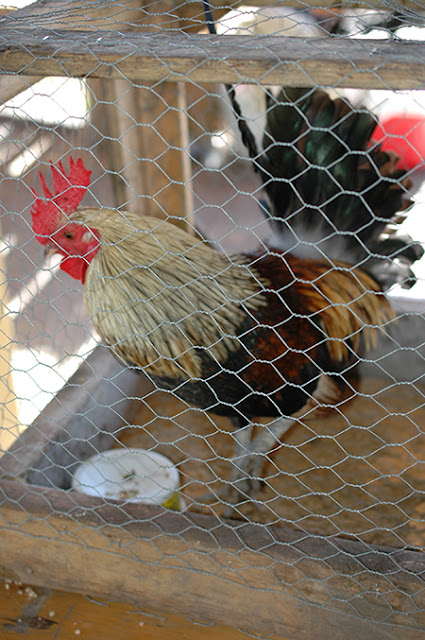 And our friend Mac entered his rooster Rocky! 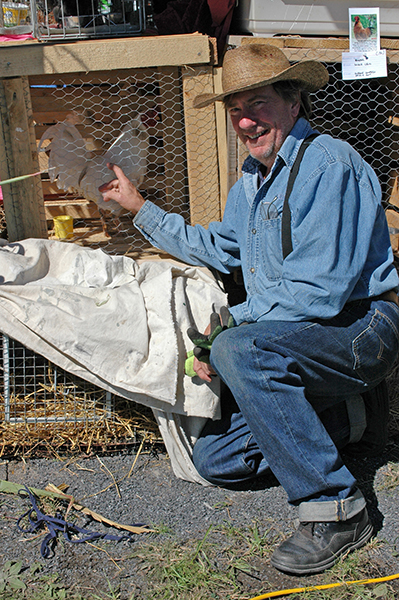 Alas, Rocky kept quiet, no doubt rendered speechless by Beaker's rooster perfection in the cage next to him! 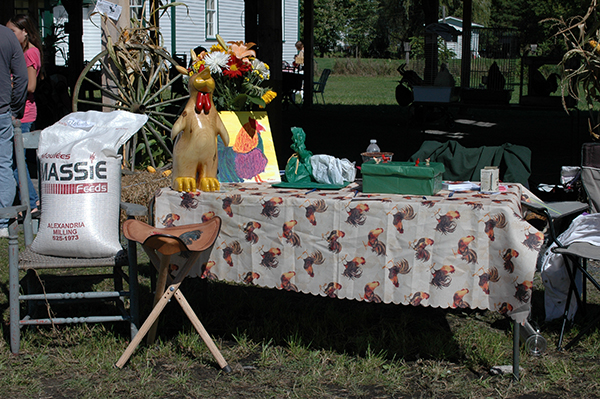 Great prizes for the winners! 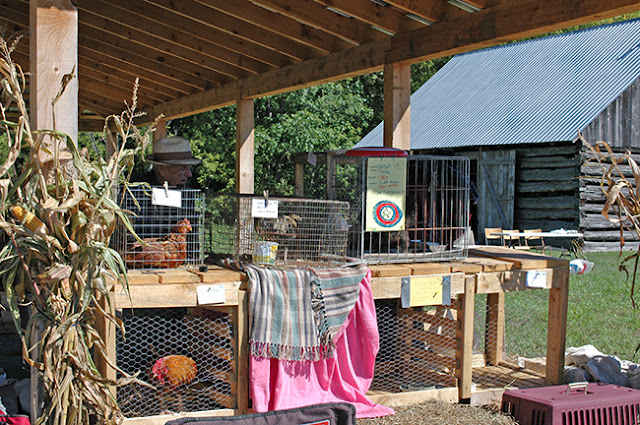 I think there were 15 or so roosters. A very good turnout! 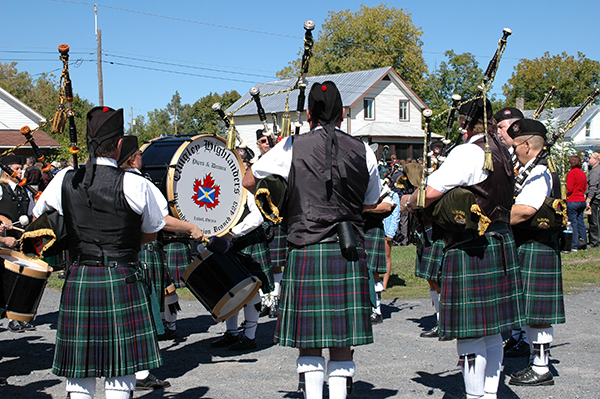 And the Harvest Festival is not complete without a pipe and drum band. The Quigley Highlanders were very impressive! 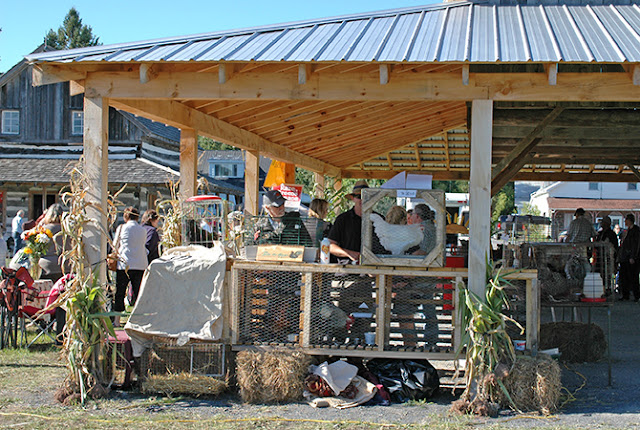 What a ton of fun the contest was!

I stole this photo off my friend Evlyn's blog. She did two great posts on the festival with lovely photos. Check them out here and here. 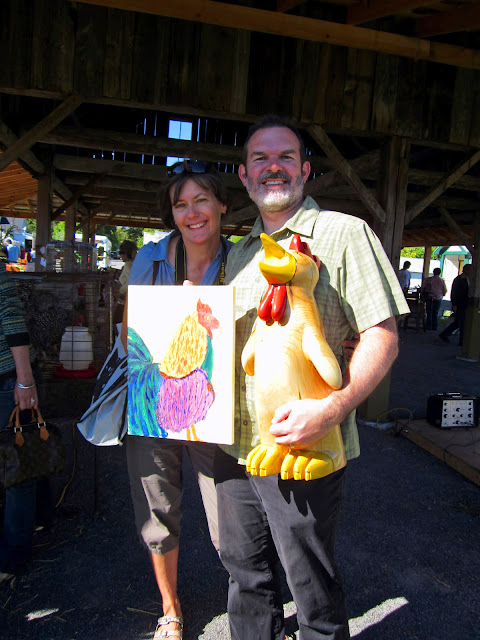 McGinty the Chantecler is fitting in amazingly well. You hear all these horror stories about too many roosters, but my three have always gotten along well. Today was the first day I let McGinty loose with the others, and they are doing just fine together! What a nice bunch of roo-boys.