I know some of you have been missing the ducks and ducklings, so here we go with today's FESTIVAL OF DUCKS! 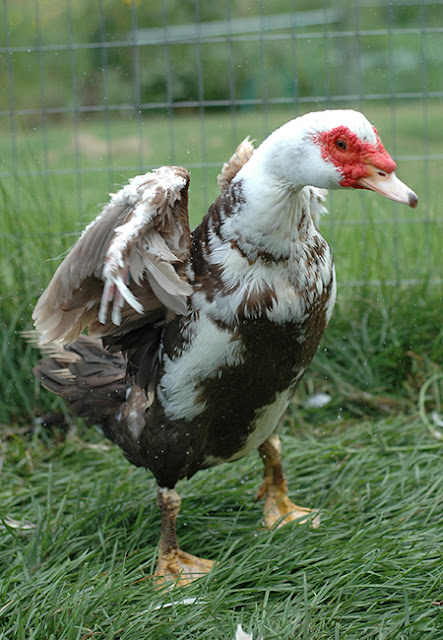 Hannibal has finished his bath and is ready to party!

And here are the ducklings that hatched out on July 23rd: 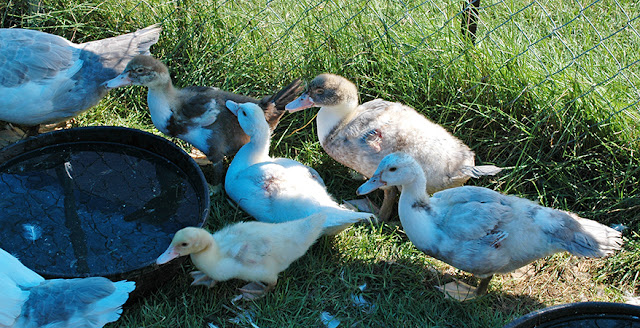 They are getting, except for that little yellow one! She was in fact the first to hatch, but now she's the tiniest and lagging behind everyone else in growth. She seems healthy and active, so we shall see. At first I thought maybe she was the only girl, which would explain the size difference, but now I suspect otherwise. 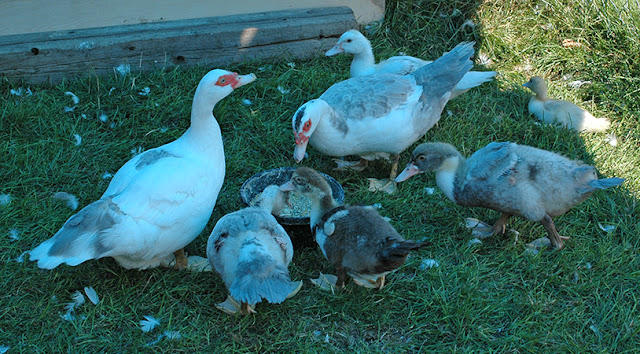 There's her tiny self, sitting off to the right. She is also the most adventurous of the five ducklings, and the only one who doesn't act like I'm a serial killer when I pick her up. Those two mamas did a good job of training their babies to be terrified of me! :( 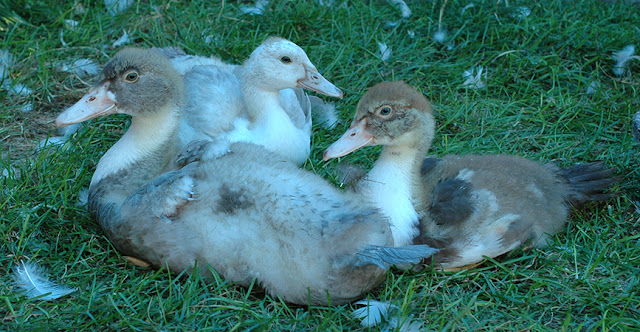 They are awfully cute, even at this ugly duckling stage. 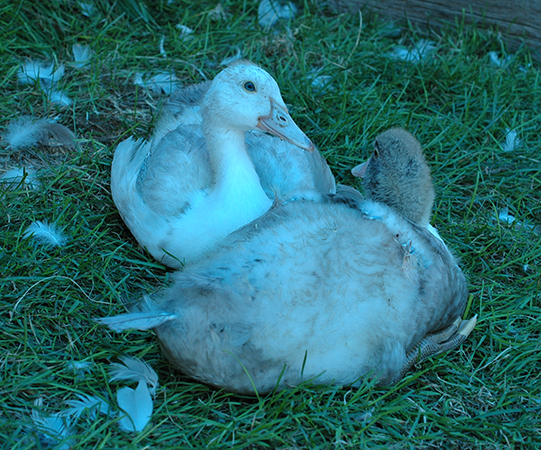 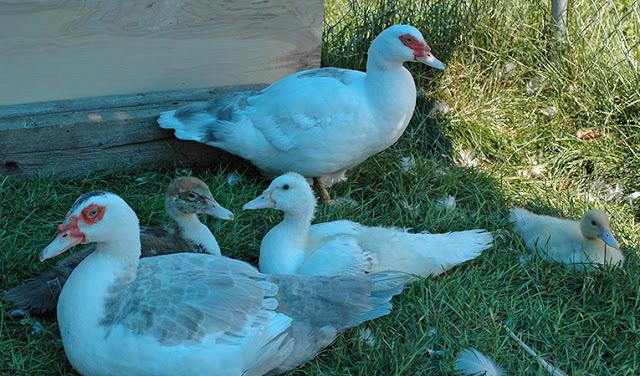 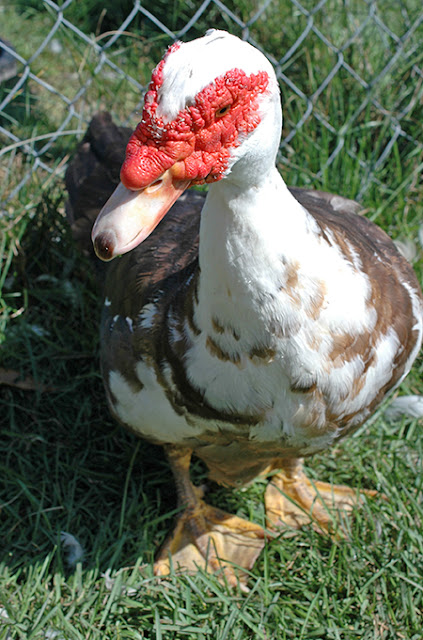 He was born last summer and I made of video of his adventures in our bathtub last October after an unfortunate feather-picking incident involving his brothers and/or sisters. 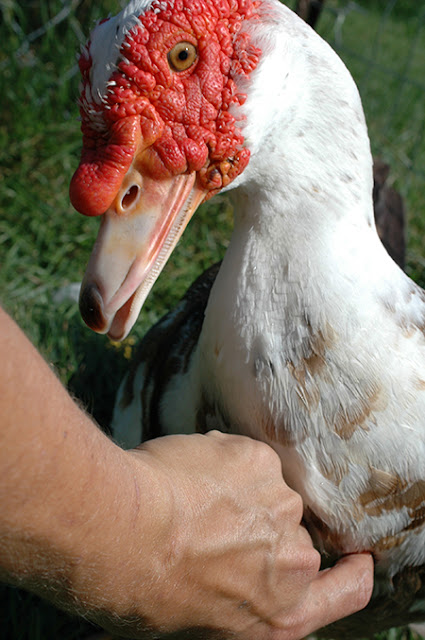 He lets me give him little scritchies on the chest. Sometimes he tries to make passionate love to my arm! 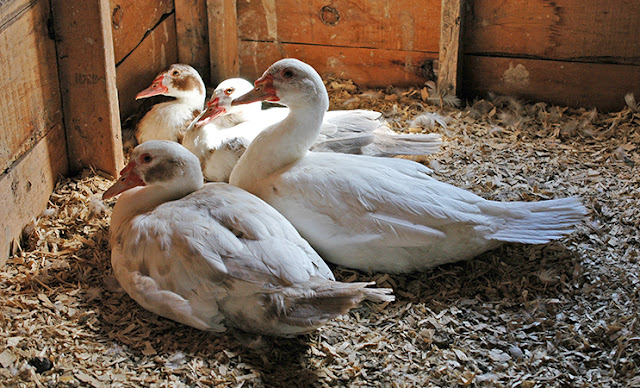 These four are from the batch born in May. Jimette was in another corner. (I named her Jim after my Dad, then realized "he" was a "she!") That huge white one is the first born from the May clutch. My friend Ronna named him Ducky Duddle and he's really sweet. He's quite happy letting me stroke his feathers and beak. 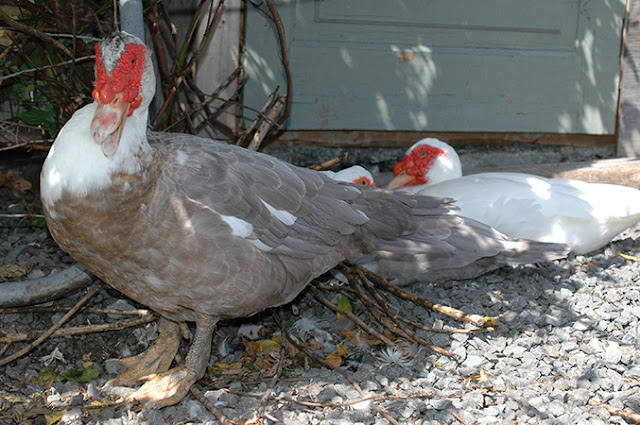 Here's Amy Winehouse
, who is actually a drake. I have to stop naming the babies until I'm sure of their sex! Amy was born in August 2011. 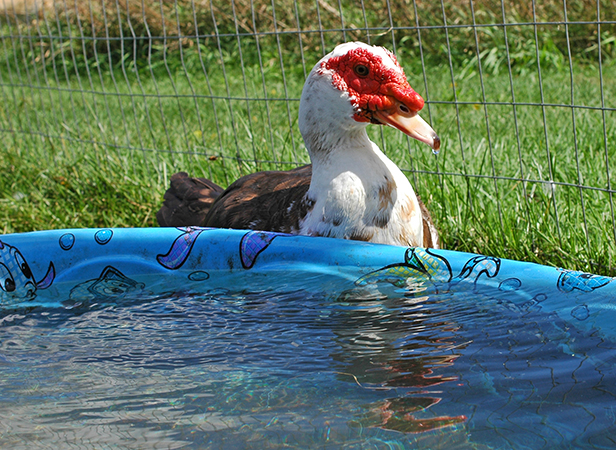 My Hannibal, lounging by the kiddy pool! 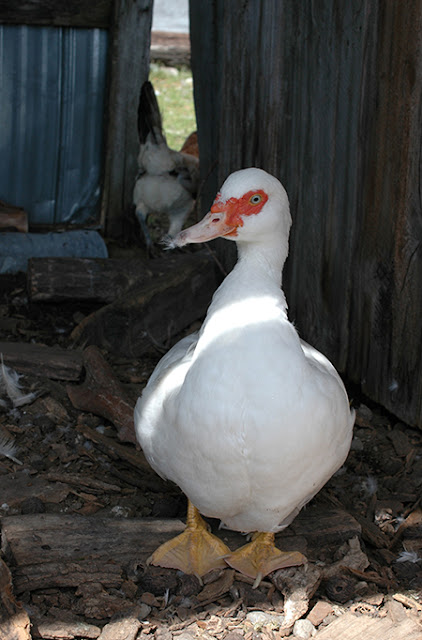 Bianca, an all-white duck who is super sweet. She is obsessed with trying to drink from the house while I change the duck water. 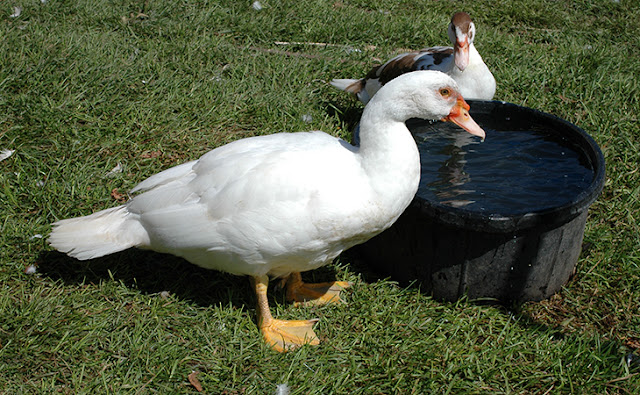 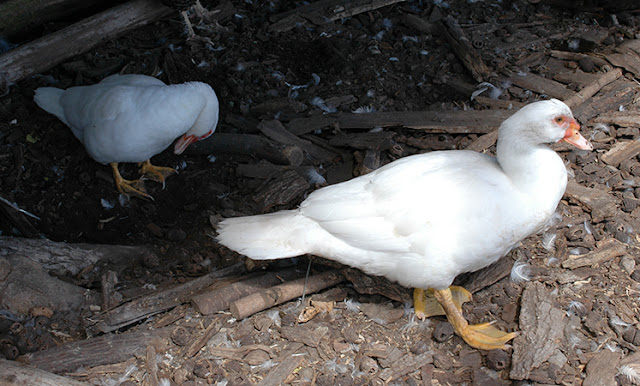 Bianca and Ducky Duddle, hanging out. 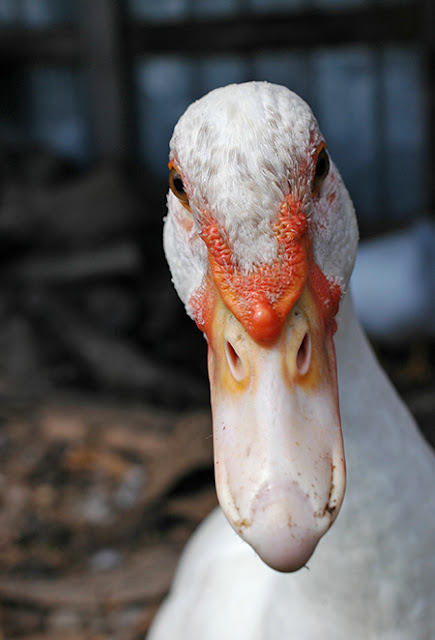 Ducky Duddle is mostly white, but has some faint flecks of brown on his head and chest. At first I thought he was perpetually dirty, but nope, it was feather colouring! 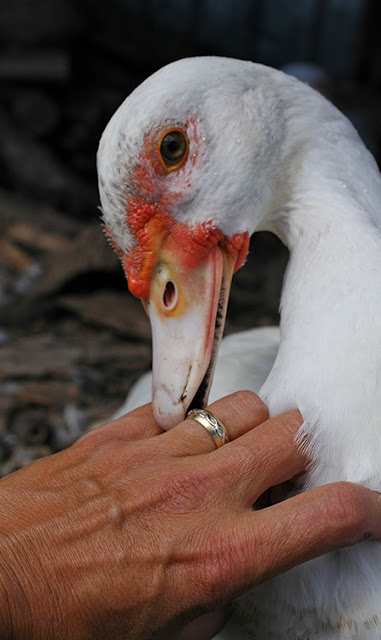 He likes to nibble my wedding ring... 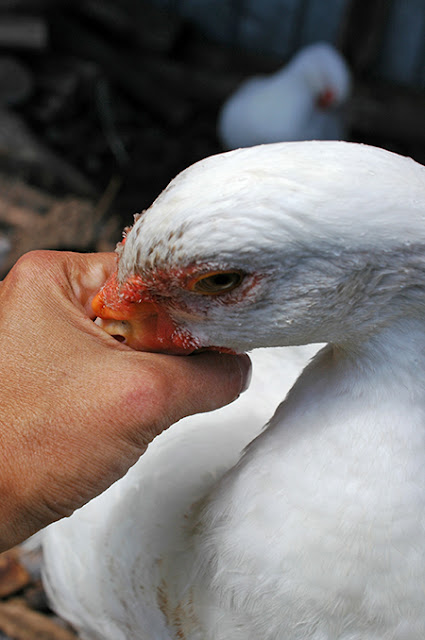 ...and stick his beak where the sun don't shine!

Hope that helped you with your ducky cravings. Chick photos tomorrow.

And remember the other day when I told you this was a Monarch? It's NOT! 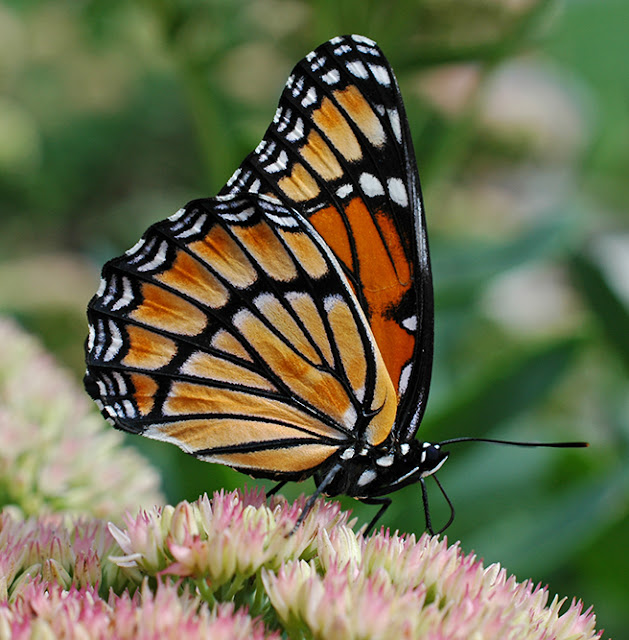 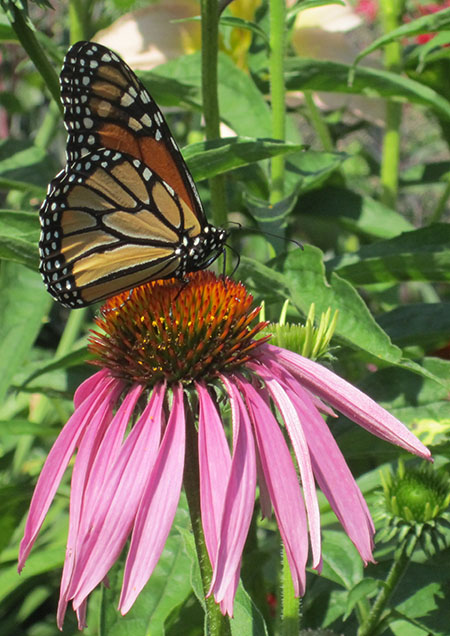 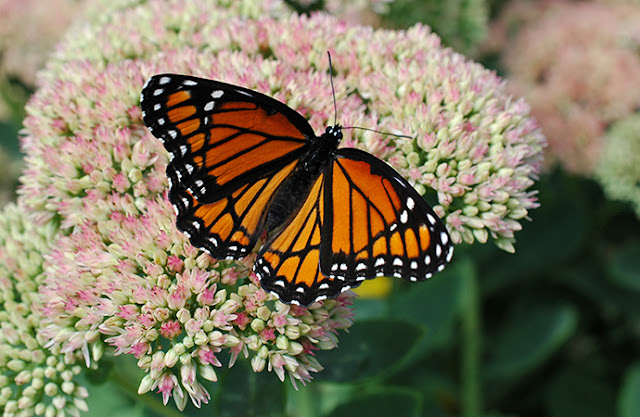 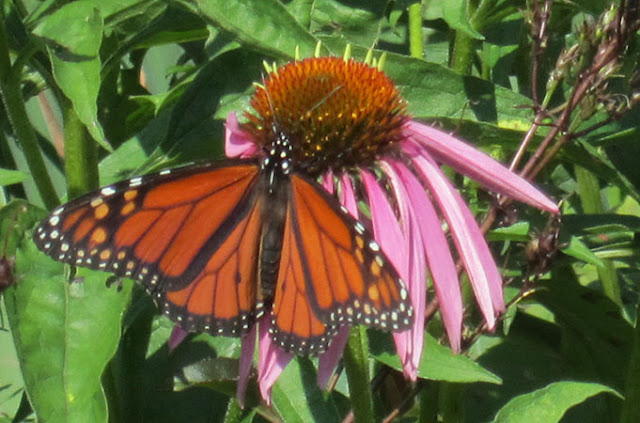 Thanks to Sheri at Willow House Chronicles for pointing this out to me. I always wanted to see a Viceroy. Now I have! :)