Can't you just find a toilet? 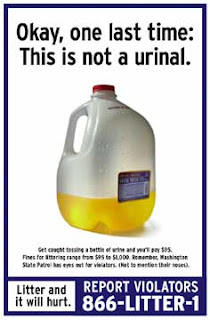 JUGS OF PEE! Who are these people? Who pees in a jug, then tosses it to the side of the road? Probably the same people who crap in public toilets then refuse to flush. Or pee on the seats. Or worse. Or refuse to wash their hands afterwards, even as a token measure when other people are watching. Well, admittedly these instances would involve women, since I haven't been frequenting men's rooms as of late. I presume the jug-peers are guys, since it's a little iffy for girls to aim that precisely. Were ya all raised by barbarians?

I first read about this issue on Sunnyside Dr., where a picture is worth a thousand words.

My next question is, does this happen in Canada? Are roadside workers mowing over urine-bombs and horrifically spraying themselves like they are in the USA? Given that twice this year I have driven past truckers standing beside their rigs peeing into fields, without an ounce of shame and with their own "rigs" on full display, I am thinking that perhaps Canucks truckers are more environmentally-friendly and just like to water the grass, sans plastique.

You know what? I'm a middle-aged woman with a middle-aged girlie bladder. I have driven across Canada twice, and one of those trips took nine days. Not once did I pee in a jug and toss it out the car window. Not once did I stand by the side of the road, cascading yellow in full view of the Trans-Canada. If I can hold it, so can you, Mr. Trucker Buddy with the way-bigger and strong bladder than me. Or for the love of God, at least hide behind a damn tree. Or use a bottle and dispose of it properly!!

I actually don't have an issue with roadside weeing in desperate situations, so long as the pee-pee person takes the time to hide him or herself so I don't have to witness the action (little kids get a total exemption, btw. They can barf by the road, too.) I myself have peed in the woods more than once! But peeing in jugs and tossing them out the window? Even in barren Canuckistan, there are enough fast-food joints and gas bars around to make this completely unnecessary. Okay, so maybe it's a problem in Nunavut, but then again, there ain't many highways up there either. And pee would freeze on contact with the ground for a large part of the year.

Take the five minutes to pull over and USE A TOILET. Cuz jugs of pee being tossed out windows are not only disgustingandgross, they are environmentally harmful and a health hazard.

Now excuse me. I have to go use the ladies' room.
Posted by Knatolee at 9:29 am