The kindness of a stranger... and a neighbour!

A week ago Friday, Gordon got stuck in our snowy driveway. This time the traction plates weren't enough to get him out. As he was puzzling about what to do, help miraculously arrived!

I took this picture from our upstairs window; it's not so great because of the window screen, but the dark blotch in the middle of the snow (near the top of the snow) is our little car and the pick-up truck of a kind stranger. This picture gives you a bit of an idea of how long our laneway is. 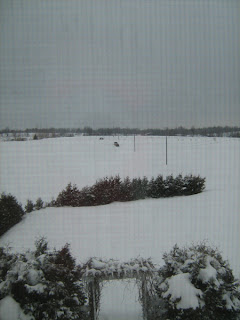 A nice young Mennonite fellow from this area was passing by in his pick-up truck and saw Gordon in distress (which did not involved G sobbing into a lacy handkerchief, not to worry), and stopped to help. (The Mennonite thing came up because G just got back from a trip to Winnipeg, and this guy is originally from Manitoba, and was talking about his community there.) He ever-so-kindly offered to tow Gordon up the last bit of the laneway. How nice is that?

You can see how our Mazda Protege 5 is completely dwarfed by the rather large truck! They attached a tow strap, and the truck started backing up, pulling our weenie car up the hill.

My little camera has quite the zoom lens: 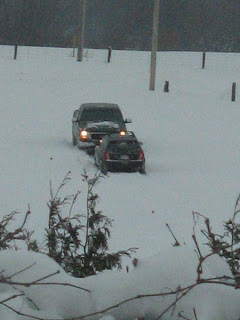 There they go! Getting closer... 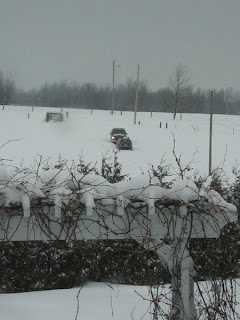 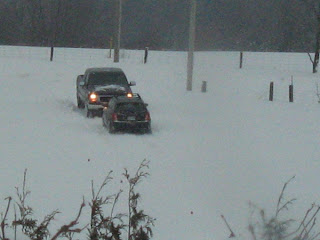 Yay! They did it! 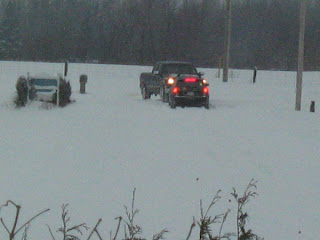 Gordon profusely thanks his helper. I love country people! 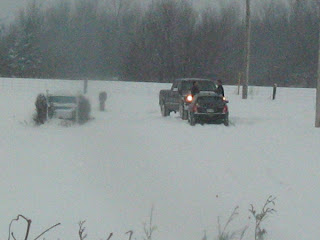 This whole episode brought a big smile to my face.

The laneway is a bit of a problem this year. We have a very reliable plough guy, Orey, but the snow is just out of control this winter. (We have already gotten as much snow as we had all of last winter.) Orey had ploughed out our laneway the day before this happened, and he showed up an hour after Gordon left to do it again.

We had even more excitement on Boxing Day, although I have no photos, alas. Last Friday we had rain on top of snow, then a flash freeze. The end result was our laneway being covered in a couple of inches of ice. Gordon did manage to get up and down it Christmas Eve, when he brought his parents from the bus depot to our house (they like the bus; don't ask.) Boxing Day was another story.

We bundled my in-laws into the car that morning. They had a bus back to Toronto to catch. We said our good-byes, and I watched from the kitchen window, holding my breath, as Gordon made his way along the ice-rink of a laneway. I was just starting to breathe again as G reached the last hill, got halfway up it, then in slow motion, slid back down while the car rotated around! He finally ended up backwards at the bottom of the hill.

I went out to help and only succeeded in nearly putting the car over the edge of the laneway into the field below (that would NOT have been pretty. There is a considerable drop from the west side of our laneway to the field.) Then our neighbour across the street, Steve, came to the rescue. Like a knight in shining armour, he arrived in his big tractor with its chains on the tires. Steve is a retired Air Canada pilot, and a great guy to have around in an emergency. He and Gordon attached a tow strap to our car, and Steve slowly and carefully towed the car backwards up the hill and onto the road! My in-laws made their bus with five minutes to spare, and my mother-in-law thought the whole tractor-pull thing was great fun.

After they left, Steve returned in his golf cart (handy farm transport) with a bucket of (cool) ashes from his woodstove. He plonked me on the rear-facing seat and backed slowly down our laneway as I sprinkled ashes in the tire tracks. When the bucket ran out, he got me another bucket and left me to finish by walking along the driveway on my own.

At the same time, he handed me a package and said, "Merry Christmas! This is the first time I've ever given anyone a tow strap as a Christmas gift. Make sure you keep it in the car." And so we are now the proud owners of a bright yellow tow strap, which is in the trunk of the car with traction plates, a shovel, and chains for the tires in case we get in real trouble (you can't drive on the roads were with chains.)

The kindness of strangers and neighbours! One day we'll have our own tractor and 4WD vehicle. I have no doubt we are the talk of the neighbourhood again. Everybody seems to know about us, even though we haven't met a lot of people yet. Despite the fact that we have lived in the country many times over the years, everyone around here thinks we are hapless city slickers.

We met our "next-door" neighbour yesterday and got talking tractors. Scott is a diesel mechanic and a solid guy. When we asked what kind of tractor he recommended, he asked us how long we are staying!!! To which I replied, "Forever!" I think people are waiting for us to pack up and run, but good grief, what's the big deal with getting stuck in your country laneway a few times? I might add we aren't the only ones. This winter we have seen quite a few cars stuck in laneways on this road alone!

Anyway, we'll just continue to plod along. No doubt we'll get stuck again, but we'll find a way out. We both love it here.
Posted by Knatolee at 9:40 am