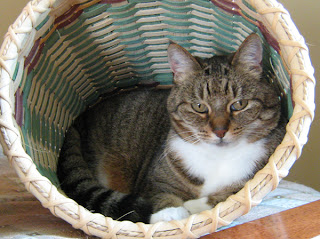 Well, I had a good time in jolly olde England and lovely Scotland, and I will write more on that later, but first the sad news. My sweet Zoë-kitty died on September 30, the day I arrived in Scotland. She was only ten years old and it was a total shock for all of us, including the vet.

The Wednesday before I left, Zoë was fine. The next day, I knew something was wrong because she wasn't eating and she was very sluggish. But every time I stroked her, she purred.

We started looking for a vet, as we didn't have one here, having just moved. Gordon managed to get an appointment for the next day, Friday. We took her in and while the vet thought she was a bit dehydrated, he didn't think she was seriously ill. However, he wanted to hospitalize her and give he some IV fluids and so on, and keep an eye on her.

We called twice on Saturday to talk to the vet. He said Zoë was responding well to the fluids and antibiotics, but that she had a ways to go. He had done various tests on her and found that some of her liver enzymes were a bit elevated, but they were the liver enzymes that are less serious when elevated (apparently there are two kinds they measure.) He thought she might be fighting an infection, as her white blood cell count was a bit off. He was going to continue treating her but overall, she was perkier and doing better. He said he would call Gordon Sunday morning. Zoë was sitting up and taking an interest in her surroundings, and the vet tech actually asked the vet if she should give Zoë a bit of food, as she was looking so much better. The vet told her to hold off for a bit.

Feeling like things were under control, I left on my trip Saturday night. Sunday night I was at my husband's cousin's house in Scotland, reading an email from Gordon saying that Zoë had taken a turn for the worse when the phone rang. It was Gordon with news I did not want to hear: Zoë died suddenly around lunchtime on Sunday. Her lungs had filled with fluid and she had frothy blood in her mouth, and she succumbed very quickly. Gordon had been getting ready to go see her at the vet's but it was already too late.

We both miss her like crazy. Zoë came to us as a tiny kitten, sent to me from near Seattle by my friend Deb, who had taken her in as a sickly little stray. She was very young, and had ringworm and an eye infection and God knows what else. She was also malnourished, and she nearly died of bacterial enteritis while in Deb's care. When Deb said she was looking for a home for Zoë, I knew this was the cat for me. My mother had died a month earlier and I think Gordon took pity on me: he agreed to adopt this little mess of a kitten. I always said that Zoë was my mother reincarnated! She could be quite the little monkey.

When Zoë was well enough to travel, she started her cross-continental journey. Boy, did she have spirit! Such a survivor. Deb sent some notes along with Zoë for the journey to Toronto, in particular:

"She is very sweet, loves to cuddle, and LOUDLY!"

Ah, and that never changed. She spent a large chunk of her life on my chest or lap. Almost every night for the past ten years, she slept tucked in behind my knees.

Zoë's journey to Canada was accomplished with the help of several wonderful people, who took her on the various legs of her trip through North America until she was finally brought to the Toronto airport by the boss of Jude Fine, a senior dog rescue worker (who sadly predeceased Zoë a couple of years back.) Gordon went to get our "itty bitty kitty" at the airport. He took the travel crate into the men's room, and opened it to find the tiniest kitten he had ever seen, with a "skunk" toy that was as big as she was!

I could go on and on about her, but suffice to say, we bonded immediately. She had to be quarantined because of her ringworm, so I would spent many hours in that room with her, lying on the loveseat, watching TV with her. She would curl up on my chest with her nose to my chin, purring like a little motorboat. Occasionally she would suckle my fingers, she was that young. She gave me and Gordon ringworm, but I didn't care. It was worth the itching. I had to bath her regularly, which was no fun for either of us, but she took it like a trooper.

I was completely smitten with this tiny creature. I called her "Zoë" because it is a Greek name that means "life". And Zoë was determined to live!

She gave us so many years of kitty love, and now she is gone and it's just killing me. I used to think I was a "dog" person who liked cats, but now I know that's not true. I fall equally hard for dogs or cats, and my heart is broken over the loss of Zoë. I had so hoped to have her for another ten years. The vet thinks she had a tumour of some kind, either on her heart or lungs, but we declined a postmortem. The vet was very upset about it all; he didn't see it coming, she went downhill that fast. I had occasionally worried about Zoë over the years, wondering how her rough start would affect her lifespan. I'm just glad that we had her for as long as we did. She had such a great personality, and she was so sweet and cuddly and just... Zoë.

We both miss her so much. Wherever her little spirit is, I hope she knows how much we loved her. She brought us a lot of happiness over the years. 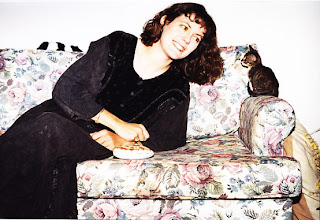 Me with Zoë in October 1997, soon after her arrival. That's her "skunky" toy behind me. 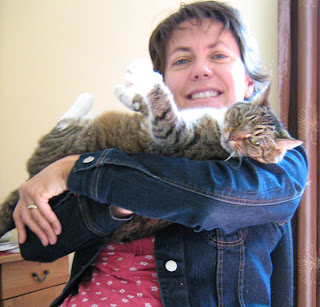 Me with my sweet little stripey-monster, just last month before the move. She really seemed to like our new house! 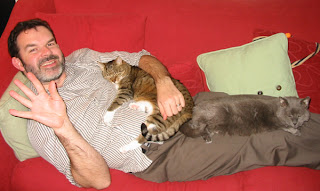 Zoë usually preferred to sprawl on me, so Gordon as always honoured when she snoozed on his lap. This was last December, not long before we lost Mashka (grey kitty.) In the past 14 months, we have lost a dog and two cats. It has been a bit rough.

Here's to Zoë, the "itty bitty kitty" who stole my heart, then broke it.