To paraphrase Monty Python, I'm not dead; I'm just resting. Although really I'm not even resting... I keep meaning to blog, then my day goes by and it's time for bed. But here I am!

This cutie-pie is Kwazii... 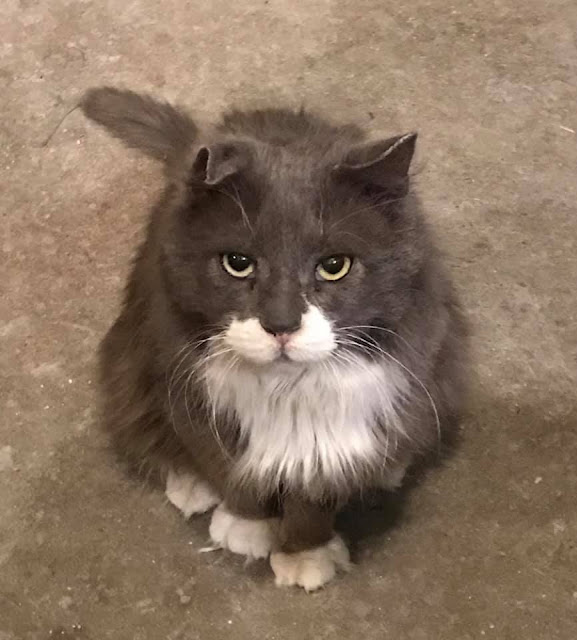 Last August, my friend Elizabeth from Furr get Me Knot Cat Haven took Kwazii in. He was an absolute wreck. He'd been living rough outside for some time. Someone had taken him in at some point and shaved him (likely he was covered in mats and this was likely an act of kindness.)

Here's how he looked when Liz got him: 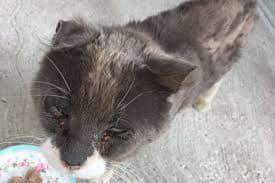 Skinny, flea-infested, bad upper respiratory infection, explosive diarrhea, ear mites, a crumpled ear due to haematomas, rotten teeth... he was not at his best. But he was SUPER sweet and just happy to be in a safe place with lots of food. He was so affectionate and laid-back and just plain happy. This cat deserved a chance!

Kwazii became our joint project. Liz found him a foster home, but would send him down to me for vet care. Our friend Debs volunteered to courier Kwazii back and forth to the farm (Liz lives about 45 minutes away from me.) 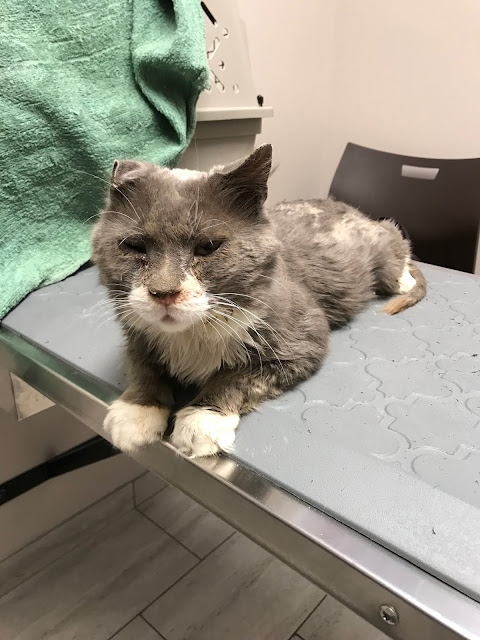 The day of our first vet visit, we got the sad news that Kwazii is FIV+. But happily, he didn't have FelV.  And FIV need not be a death sentence! Cats can live long lives with this illness, and they can live with non-FIV cats so long as they all get along. (FIV is transmitted mainly through deep bite wounds.) 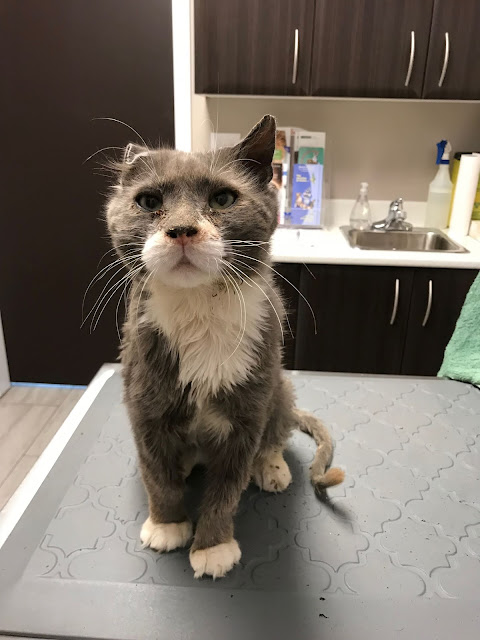 His coat started to grow back and things slowly began to improve for him.

We had him vaccinated and dewormed. We had him neutered, and had all his bad teeth removed and the remaining ones scaled.

Amazingly, the GoFundMe account we set up for Kwazii covered all these bills. People were really generous! Kwaz is an easy cat to fall in love with. 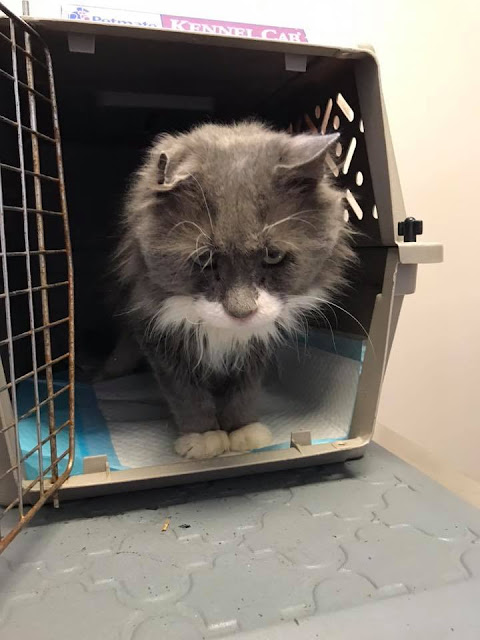 Kwazii was doing great except for one thing: he continued to be afflicted with explosive diarrhea. Nothing really seemed to help for long. And Kwazii LOVES to poop in his crate and roll in it, so he was getting a lot of baths....

Finally the vet suggested a comprehensive diarrhea panel. So we went ahead with that. Turned out the Kwazii had clostridium in his feces, despite repeated treatments with Flagyl. Dr. Barb was suspicious. He also had coronavirus in his poop. Was is FIP? We sure hope not; FIP is deadly and awful. But we had kind of reached the end of the road with diagnostics, unless we were willing to have Dr. Barb perform exploratory surgery on Kwazii, and take some tissues. This, we were told, would yield a definitive diagnosis. But if something WAS going on, it could also make Kwazii crash.

Still, without a concrete diagnosis, we wondered if we'd ever be able to stop Kwazii's terrible diarrhea  (which not only were uncomfortable for and detrimental to him, but made him a less-suitable candidate for adoption!)

Liz and I talked. We decided to go ahead with the surgery. Happily, Kwazii came through it like a pro and charmed everybody at the clinic. His abdomen was sliced open, and Dr. Barb investigated everything and took tissue samples. She found that a section of his intestine and some lymph nodes were enlarged but otherwise, things looked okay. She closed him up and sent the samples to the lab.

When she called to update me, she was laughing. When she went to check on Kwazii the evening, he was "face down in his food bowl" eating like he'd never seen food before. Apparently cats are often uninterested in food after abdominal surgery. Not our Kwazii! Hours after surgery, he had bounced back like nothing had happened. 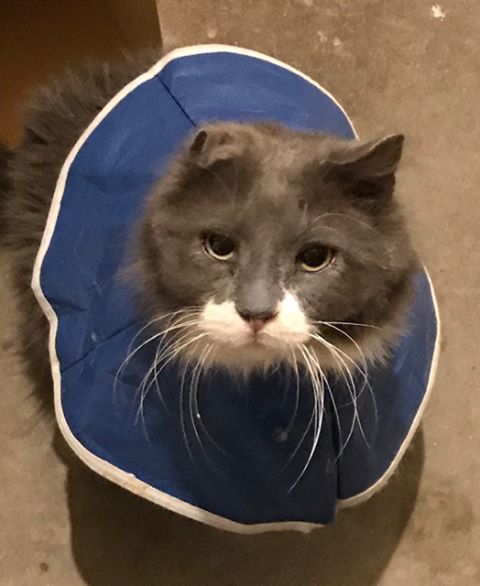 He came home with a delightful cone. We decided that Kwaz would stay with me for the foreseeable future. If he had a terminal illness, I would keep him, but if it was something treatable, I'd fix him up and do my best to find him a home or long-term foster home.

The next week, we got the diagnosis: Kwazii had lymphoma in his intestines, with a tiny amount in his liver: a low-grade, small-cell carcinoma that not aggressive and was very treatable. There are no guarantees, of course, but with treatment he could live years with this. It is not uncommon for cats with FIV to develop lymphoma. I was actually happy about the diagnosis because (a) now we had an answer and (b) it wasn't FIP!

We decided to go ahead and put Kwazii on chemo. Cats do a lot better with this than humans. So a week ago, Kwazii began his regimen of Chlorambucil and Prednisolone. So far, he's acting like nothing has changed. He could possibly lose his magnificent whiskers, but not his fur. I've been keeping a close eye on him and so far, touch wood, he is doing great! 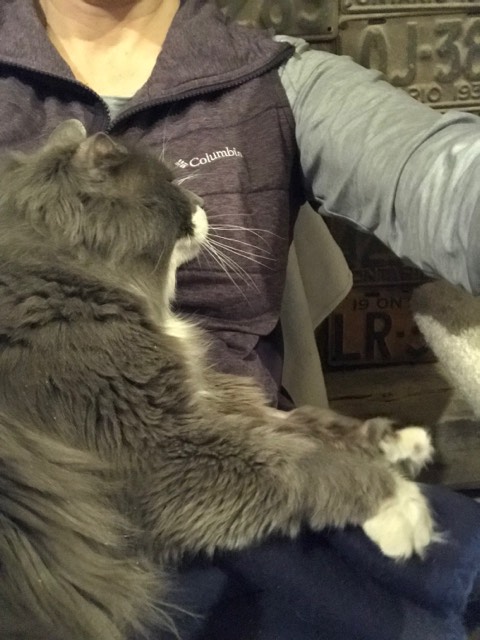 And he loves to snuggle.

We'll see how he does, but my hope is that when the chemo ends, I'll be able to find him a loving home. Of course I would always take care of him here, but it would be so much nicer for him to be in a home with fewer cats where he can get all the love and attention he deserves.

Some people would think it crazy to spend so much time  and money on one cat but I say WHY NOT? I can never save all the cats, as much as I want to. I have to pick and choose my battles in fostering. This six-year-old boy is a truly lovely fellow who deserves a chance, and a loving home. And there really are no guarantees with any cat. In a year, I lost my Millicent, Mootie and Keaton, and none of them was particularly old. They'd all been seemingly healthy until they all died suddenly of different kinds of cancer. It was just bad luck. Kwazii could live for years. Or maybe he won't, but he has a much better chance of it now that we've taken him in and improved his quality of life. 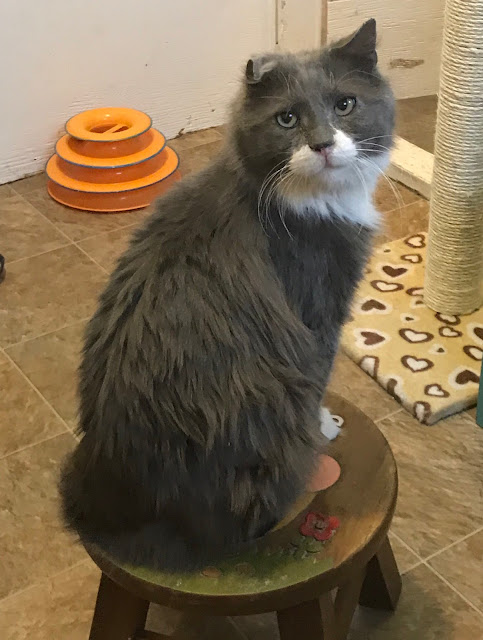 And he has so much love to give! Plus he's devastingly handsome.

HUGE thanks to all the vets who have cared for Kwazii, especially Dr. Barbara Tomlinson of St. Lawrence Valley Animal Hospital and the Cat Clinic of Cornwall. You've all been so wonderful to this guy.

The BIGGEST thanks goes to Elizabeth, though. She took this sad and ragged boy in when no one else could or would. If it weren't for Liz, Kwazii would surely be dead by now; he could not have made it through another winter outside. Liz is an angel to kitties.

Go Kwazii Go! We are all rooting for you.