We had quite the weekend! Today is National Cupcake Day for SPCAs and Humane Societies. People are selling cupcakes all over Canada to raise funds for animal shelters. My friends Ronna and Christina and I baked a bunch of cupcakes for the Stormont, Dundas and Glengarry OSPCA (where our tripod kitty Alex came from.) Christina took 66 (!) cupcakes to sell at The Squire Shop in Cornwall. Don't they look yummy? 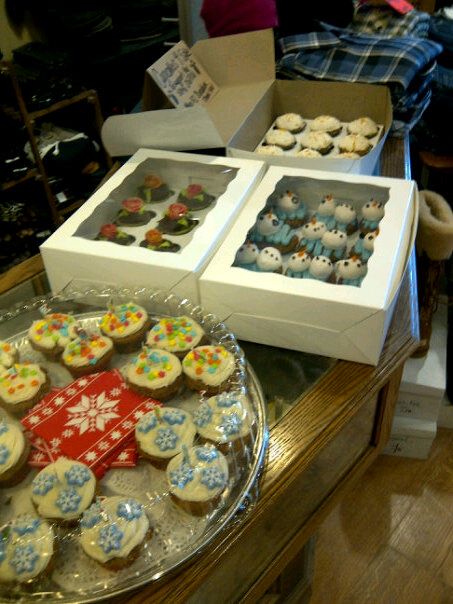 Ronna made beautiful rose cupcakes, as well as sunflower and snowman cupcakes. Christina created yummy Skor and vanilla cupcakes with cute bird and snowflake decorations. I made coconut-lemon cupcakes with cream cheese icing. 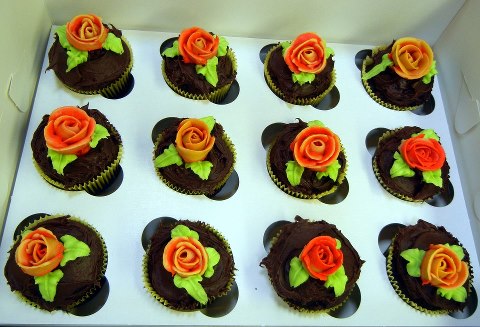 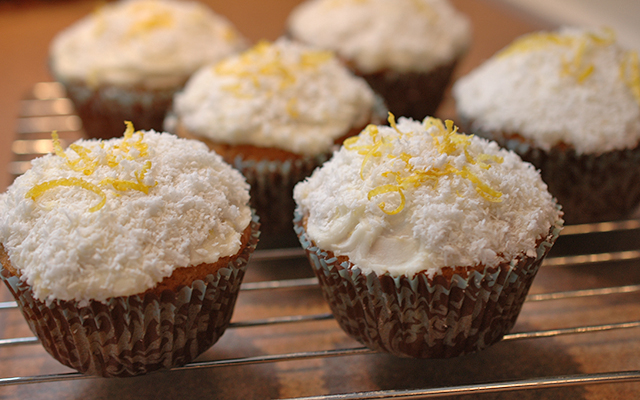 Here is the recipe for my lemon-coconut ones!

Yesterday, Gordon and I visited the shelter in Cornwall. 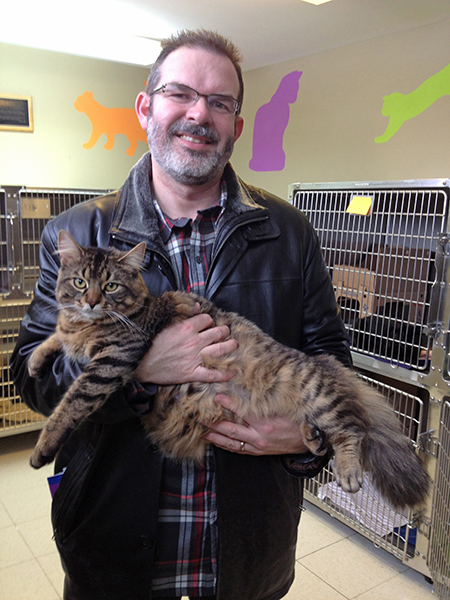 This very big boy is an Alex look-a-like! His name is Bear and he was a lovely, mellow guy. He's one big kitty, and he's looking for a home. (No, he did not come home with us!) We were there because in January, Gordon did a fundraiser on his law firm Facebook page. For every page "like" he got in that month, he donated $1 to our shelter. Yesterday we went down to drop off a cheque for $1100! 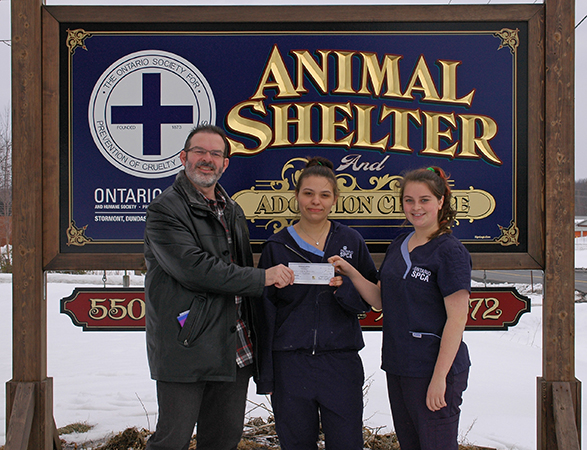 Those gals were very brave, out in the snow in their shirtsleeves!

Meanwhile, back at home, Emily and Alex were sacked out on my desk after a leisurely morning of bird and squirrel watching... 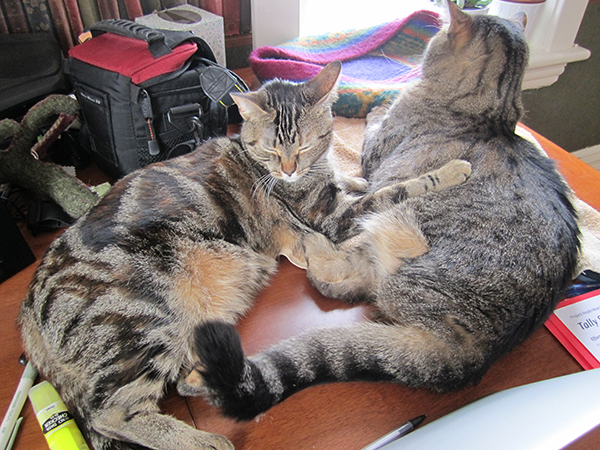 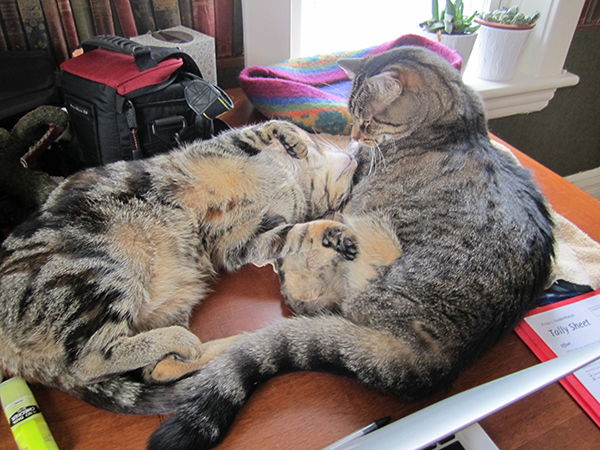 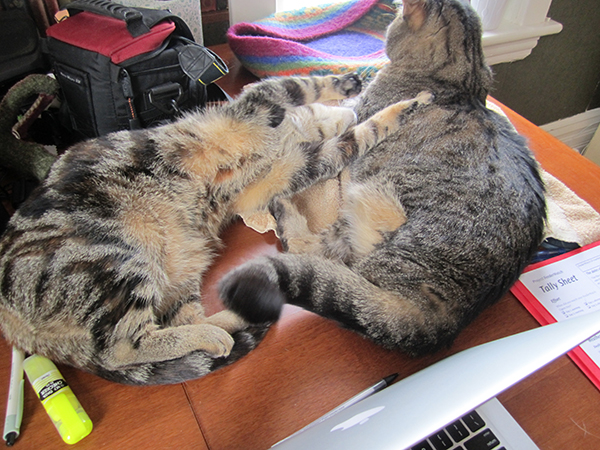 "Pay attention to me!" 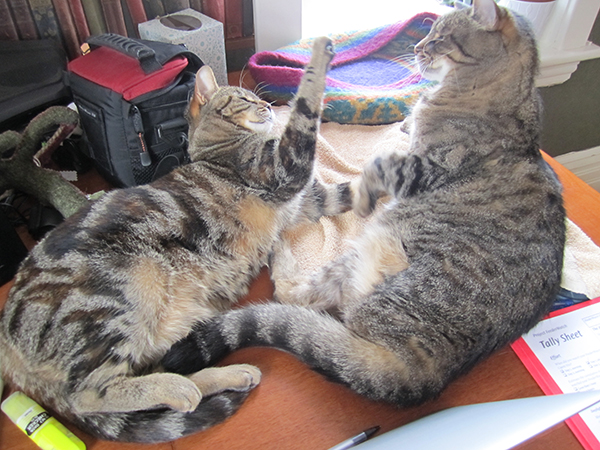 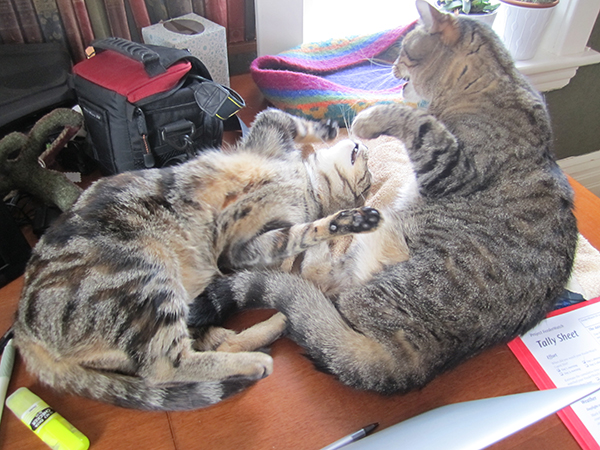 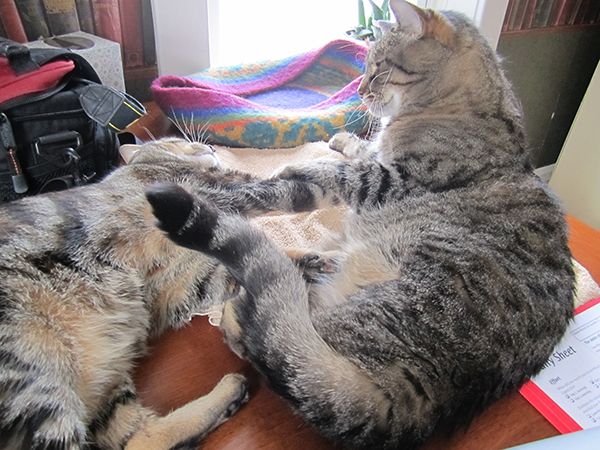 Yep, a cat- and cupcake-filled weekend. And guess what? Our black granary kitty is still out there! On Friday night, I went out to look after the ducks and chickens, and the poor cat was sitting on the rim of our heated birdbath, taking a drink of water. When he saw me, he scampered back off to the granary. I'd been giving him bowls of water, but they froze quickly. We now have him set up with a heated dog dish of water, twice-daily feedings, and a feral cat shelter made from a cooler, filled with straw bedding.

We named the cat "Raven", because he's black and was in the BIRD bath, and it's a name that's good for a girl or a boy. We don't know what sex he is; I'm just calling him a "he" for now. My goal is to get him used to me, then catch him and take him to the vet for neutering and vaccinations. We'll see how that goes. I don't know how wild or feral he really is. He's not here every day, or at least the food isn't disappearing every day, but he's around most days. I bet he's out making his rounds. I've seen him three times in the last month; Gordon hasn't seen him at all. I may end up borrowing a humane trap and catching him that way. He looks young to me, under a year but not a tiny kitten.