Carcass of the day 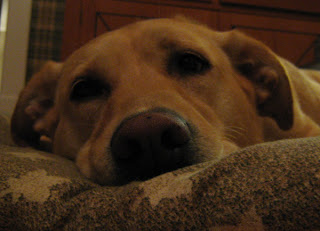 The lovely Miss Sophie.
Our 98% yellow Lab Sophie loves me. Or so I tell myself. Lately she has been surprising me with .... gifts. Frozen gifts. Little trinkets discovered in our walks through the fields and woods.

First it was the furred head and spine of what I feared was a cat (dear God, no!) but what I soon realized was a lagomorph (when I finally remembered that rabbits and hares aren't rodents. Duh!) I think it was a snowshoe hare, to be exact. I don't know what killed and ate most of it (coyote? raptor? lagomorph-loving sasquatch?), but Sophie felt compelled to dig the frozen prize out of the snow and bring it to me. I took it from her and praised her for her generosity, then tried to re-bury it in the snow beneath a nearby bush. Whereupon Sophie took it upon herself to excavate the treasure yet again. Whereupon I said, "Let's just continue our walk without the bonus head, shall we?"

Life went on. Later that week, we were playing fetch up near the house. Sophie came trotting up to me with a ball in her mouth. Wait a minute. Tristan had the ball, and it was bigger than whatever Sophie had in her mouth, which I could now see was NOT the ball.

"Ptuie!" Again, she dropped her prize at my feet. My little retriever girl.

It was blue. Blue? Oh dear. Blue is not good. It was the frozen, severed head of a bluejay. Glimpses of brain matter. Don't. Want. To. Know! (What IS it with heads around here?!)

"Why thank you, Sophie darling. So generous. Eeeyuw." Whereupon I did my best to bury poor bluejay in the snow under our pretty blue spruce. I never learn.

The next day, Mr. Bluejay makes a repeat appearance. He's not looking any better. This time I kicked the head back under the spruce and ran away. Poor little bird. I politely asked Sophie to refrain from further excavations.

Apparently I didn't ask loudly enough. Another day, another walk, and at the end of it, another carcass. When I saw Sophie running across the field to me with a rather large item in her mouth, I knew it wasn't going to be that diamond tennis bracelet I was hoping for: 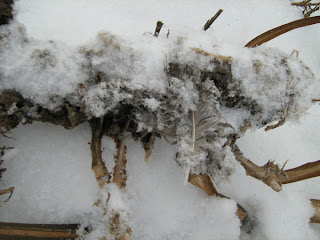 I'm pretty sure it used to be a duck. Now it's just a frozen ribcage with a few feathers. It's not so gross if you just picture a post-feast Christmas turkey.

I don't know what Sophie has in store for me next, but I do know one thing. This game is going to be a LOT less fun in spring, when the carcasses are thawed and considerably more odiferous.

And here are gratuitous photos of Tristan, who never brings me stinky icky things, just tiny cat toys he shouldn't be playing with: 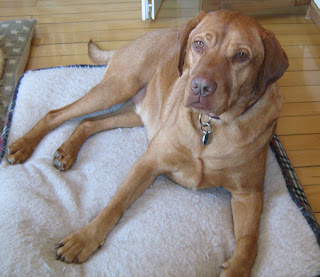 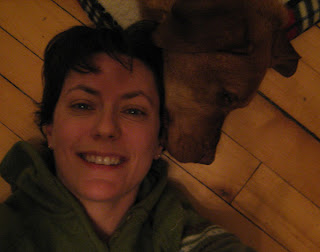