Well... we had an interesting week here at the farm! It started around last weekend, when the temperatures rose and we had torrential rain (and even some thunder and lightning!) Things got pretty wet as over two feet of accumulated snow (and higher drifts) melted and got rained on.

Then on Wednesday, we got the windstorm. Bill, the former owner of this farm, said it was the worst windstorm he'd seen in all his many years of living here.

The power went out twice, for about six hours all together. It wouldn't have been so bad had the power outage not meant that the sump pumps in the basement stopped working. And we haven't bought ourselves a generator yet (or a tractor or a pick-up truck, for that matter!) And Gordon was conveniently (for him) in Winnipeg on business, so I was alone here with the bucket.

I spent my day taking buckets of water out of the basement. The walls were leaking water (not surprising; we have a 100-year-old stone foundation that is normally quite dry, but there is just too much water around right now for most basements to deal with.) The sump holes started overflowing, which is when I started my one-person bucket brigade. Fortunately I kept it mostly under control, but it was hard work. It didn't help that Alex the tripod-kitty wanted to keep sticking his nose and paws in whatever sump hole I was trying to bail out! That cat is into EVERYTHING.

A large area around the furnace had an inch of water on the floor, but luckily the furnace is on blocks. There was water pooling in other places as well, but no major harm done, and anything we store in the basement is in plastic boxes.

The greater damage came from the windstorm, although it could have been a lot worse. It was scary and gave me some flashback to Hurricane Juan, the eye of which passed over our Nova Scotia home in September 2003.

This windstorm ripped half the metal roof off the back extension of our granary: 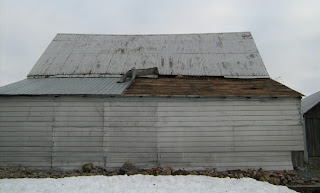 Luckily, that section of roof didn't hit our house or garage, but instead ended up in a nail-studded ball on one of my nice flower beds: 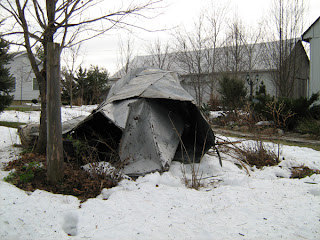 It was a tad too heavy for me to shift on my own. In fact, it's still sitting there while we figure out what to do with it! 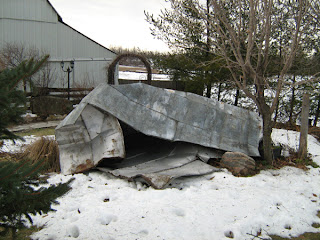 The storm also blew a door off the back of the barn. (That red metal thing is covering a glass window that blew out in an earlier storm this winter!) Sophie appreciates the handy new entrance to the lower barn. 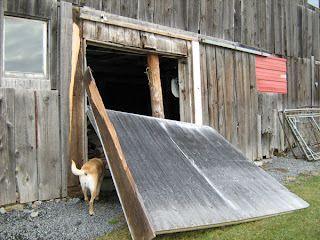 The winds also peeled back part of the metal roof on our wood shed, but you don't need a photo of that!

The thaw has led to incredible amounts of water everywhere. One road near us is closed due to flooding from the River Beaudette, which runs across the back of our land (and empties into the St. Lawrence River), and has probably completely flooded the back pasture, not that I have gone back to check. Here is one shot of our fields and drain (creek) as few weeks ago: 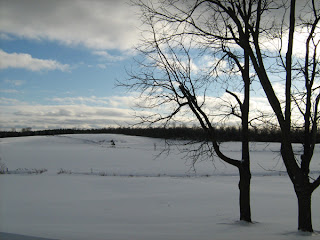 Here it is last Thursday. The creek completely burst its banks, and had receded a fair bit when I took this photo: 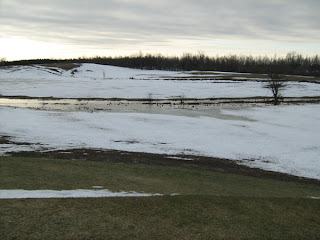 Here's a shot I posted in December: 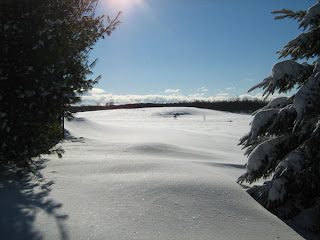 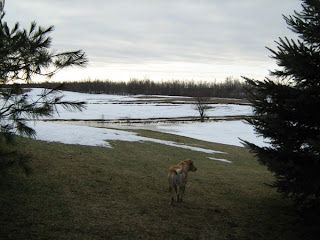 And near the metal roof, I discovered purple pansies in bloom! Prior to the thaw, this had been buried under a few feet of snow. Neat, huh? But despite the thaw, I don't think spring is quite here yet! 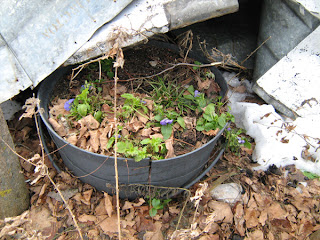 And Sophie and Tristan are happy to be outside with the precious blue ball, whatever the weather! 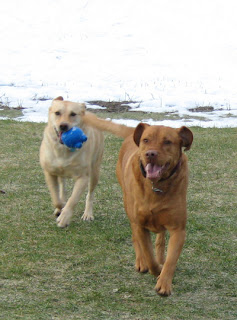